"I'm going to be abused and killed but rise on the third day," says Jesus. The disciples self-medicate by changing the subject to something more pleasant: "Let's talk about who is the greatest" (9:34) or, in the case of James and John, "Jesus, let's talk about upgrading our seats for next season" (10:37).

She came to a party thrown by the Easter Bunny fully expected what he had promised, an egg hunt that guaranteed a basketful of eggs. And she was disappointed. For some people, Easter boils down to an egg hunt. They are drawn to the annual celebration of springtime, hoping that the trumpets, the lovely Easter clothing, the flowers, and the chocolate eggs will bring them a momentary burst of hope. Something sweet to take the taste of life's bitterness from their mouths for a few moments.

The women on Easter morning came to the tomb, having been repeatedly promised a Resurrected Lord, expecting to find his prone body, still in the tomb. They seek to anoint his body as a way of showing their last respects. For some people, Easter is just another day. They expect nothing from it, because they are too absorbed in the pain and struggle of their lives. Their focus on that pain has blocked the second part of Jesus' message"and rise on the third day."

The instructions by the angel are for anyone who comes to Easter expecting death when they have been promised life. It's for them and it's for us.

"You are looking for Jesus of Nazareth who was crucified. He has been raised; he is not here . . . Look, there is the place they laid him. But go, tell his disciples and Peter that he is going ahead of you to Galilee; there you will see him, just as he told you" (16:6, 7).

Some of the most ancient authorities bring the book of Mark to a close at the end of verse 8. If we end the book at verse 8, the women only do one of the things the angel instructs them to do. They go. They flee in fact. They flee in "terror and amazement." But "they say nothing to anyone, for they were afraid."

Eventually, we assume, they did tell the tale. But, to linger on verse 8 for a moment this Easter Sunday, let's not be too tough on the women's initial response. Let's not scold them, saying, "You should have known you wouldn't find him in the tomb after his repeated promises of rising the third day. You should have come to Easter Sunday on a life hunt not a death hunt. You should have come expecting hope and life and joy to triumph over despair and death and sorrow. Today and in the days ahead."

Let's not be too tough on the women's initial response to Easter Sunday. When you are on a death hunt and you find life, amazement is a natural response.

A Challenge to the Atheistic Mindset
Frank Viola
2 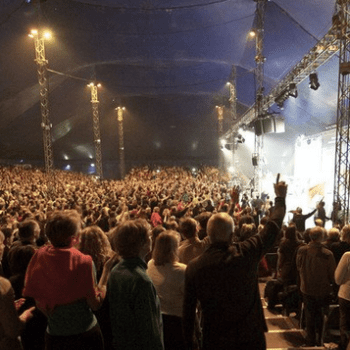 Groundhog Day and an article every evangelical should read: An empowering and...
Jim Denison
Get Patheos Newsletters
Get the latest from Patheos by signing up for our newsletters. Try our 3 most popular, or select from our huge collection of unique and thought-provoking newsletters.
From time to time you will also receive Special Offers from our partners that help us make this content free for you. You can opt out of these offers at any time.
see our full list of newsletters
Editor's picks See all columnists