Timothy A. Beach-Verhey is co-pastor, with his wife, Kathy, of Faison Presbyterian Church, in Faison, NC. He also teaches at Mount Olive College and is the author of Robust Liberalism: H. Richard Niebuhr and the Ethics of American Political Life from Baylor University Press. Here, he discusses H. Richard Niebuhr, one of the 20th century's most significant theologians, Richard's even more-famous brother Reinhold, and how the Niebuhrs shaped consideration of religion and politics in their day and might shape it in our own.

Greg:Some folks would say that the term "liberal" is at best, out of fashion, and at worst, perceived as a negative. Yet in Robust Liberalism, you seem intent on reclaiming liberalism as a theological option. Why is this an important project for you?

Tim: Greg, you are right that the term "liberal" has all sorts of negative associations today. Both theological and social critics have presented it as an invidious source of social fragmentation and moral relativism. They trace liberalism's pedigree to Enlightenment philosophy and condemn it as inextricably bound to the worst features of Modernity—namely secularism, materialism, and radical individualism. Longing for a greater sense of community and more stable moral norms, liberalism seems to many as at best dangerous and at worst a dead-end.

I resist this approach for two reasons. First, it is not historically accurate. Liberalism has a much richer and more varied history than much of the present discourse suggests. It is neither simply the product of the Enlightenment nor necessarily bound to anti-religious secularism and self-interested individualism. So, part of what I want to do is rehabilitate liberalism by describing a theologically and socially robust alternative to the secular, individualistic form it so often takes in current social and theological discourse. H. Richard Niebuhr provided me with a perfect exemplar of this position. So, I put his more theologically profound and historically nuanced version of liberalism in conversation with both critics and defenders of contemporary liberalism, showing that the debate in most social and religious circles is stunted and inadequate.

Second, I resist this simplistic account of liberalism because it threatens to throw the baby out with the bathwater. Radical individualism and anti-religious secularism are real dangers in contemporary society and they must be resisted. But by imagining that these are inextricably bound to liberalism, we are also in danger of jettisoning some of its more laudable features. Liberalism has always been about freedom, as its name denotes. American democracy is liberal in form. In other words, our system and the ideals behind it have always protected the rights and freedoms of minority groups from the will of the majority. Thus dissenters of every stripe—religious, political, and cultural—have had a place in American society. It is quite popular today to say that freedom of religion is the "first freedom." And I genuinely believe this is true. Freedom of conscience and all the freedoms that grow from it in American society reflect James Madison's conviction that the authority of the state and of the majority must be limited. In his Memorial and Remonstrance Concerning Religious Liberty, Madison wrote: "It is the duty of every man to render to the Creator such homage and such only as he believes acceptable to him. This duty is precedent, both in order and time, and in degree of obligation, to the claims of Civil Society." We in the United States refuse to simply allow the majority to have its way in all things because the majority is not God!

Liberalism is important because it protects the rights of individuals and groups to love and obey God above any and every worldly authority. I believe Christians and others need to recognize the religious roots at the heart of American liberalism and offer to others, including those of other religions and no religion at all, the same liberties we claim for ourselves. Otherwise, we are in danger of putting ourselves in the place of God! This was the original sin and it is still with us. I believe liberalism, properly understood, is not so much permission to sin, but a hedge against sin.

In this book, I try to describe a liberalism that is religiously motivated and theologically profound because I believe it is socially appropriate, given the diversity of contemporary culture, historically accurate, given the heritage of this nation, and religiously faithful, given that God alone is the ruler of the universe and the Lord of the conscience. I am convinced that genuine public discourse and social cooperation in American political life requires just this sort of liberalism. 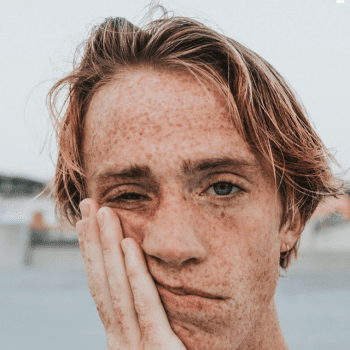 The Catholic Church, Not Pro Sports, Should be Leading the Fight Against...
Brian Fraga
4

On the Common Good: Politics, Partisanship, and Secular Franciscans
David Cruz-Uribe
Get Patheos Newsletters
Get the latest from Patheos by signing up for our newsletters. Try our 3 most popular, or select from our huge collection of unique and thought-provoking newsletters.
From time to time you will also receive Special Offers from our partners that help us make this content free for you. You can opt out of these offers at any time.
see our full list of newsletters
Editor's picks See all columnists