I attended a communion service recently. This particular week people were bringing nonperishable food items and medical supplies forward for "Christmas in July" to restock local food pantry and shelter supplies. Here they came, one with a box of macaroni, another with a box of Band-aids, to place before the altar before kneeling at the railing to receive communion. It reminded me that our lives are a journey in which, as we give of ourselves, we receive from God. As we filed toward the front, a small child, maybe three years old and judged too young to commune by his mother, was seated on her lap in the second row. A question popped into his eager young mind, and being a child, he had the good sense to shout it out. "Mommy, where are all the people going?" "Shhh," she said. But he would not be shushed. "Where are all the people going?" he demanded, even more loudly. She clamped her hand over his mouth, but not before he cried out "I want to go too!"

Several years ago, one March afternoon, I sat at the bedside of a dying colleague. He was in the advanced stages of liver cancer. I had brought him communion. I sat with him and his wife in the back bedroom of their ranch house. The room had the high windows that you crank open, situated close to the ceiling, the kind that you can hear more out of than you can see. His eyes were closed and all was silent in the room except for the sound of my own voice as I began the Words of Institution: "On the night in which he was betrayed, Jesus took bread . . ." As I paused, suddenly several sounds, one after another, interrupted the silence. There was the screech of a school bus stopping outside. A bird's wings whirred as it flew by the window. The clock in the hallway began to chime the quarter hour. A stream of sunshine, bright enough to cut the dust, flowed through the little window, lighting up our hands holding the elements together. Finally, there was the sound of children laughing. My colleague opened his eyes, looked up at me, smiled and said, "Life goes on."

These stories share something in common. In both the church scene and the deathbed scene, people are going somewhere. In one, they are going to the altar and in the second, someone is moving to the edge of the Jordan to cross to the next life. In the journey of life and the journey of death we are nourished with the body and the blood of Christ.

In our scripture passage this week, Jesus has pointed to his body and blood as nourishment for eternal life. His opponents are threatened by this claim, and his disciples also struggle with it. "When many of his disciples heard it, they said, 'This teaching is difficult; who can accept it?'" (Jn. 6:60). "Because of this many of his disciples turned back and no longer went about with him" (Jn. 6:66).

The question arises that if we are no longer going about with him, then where are we going? If I'm not on a journey, like the Christmas in July communion procession, in which I am nourished by God so that I may give to others, then what am I doing?

Peter realizes that, while Jesus' message and way are not easy, that's all he's got. Jesus asked the twelve, "Do you also wish to go away?" A "Yes, but" is implied in Simon Peter's plaintive response: "Lord, to whom can we go? You have the words of eternal life. We have come to believe and know that you are the Holy One of God" (Jn. 6:67-69).

Jesus' journey has become our journey. We throw in our lot with him. And what kind of journey is Jesus on in the Gospel of John? The Gospel of John is an ancient biography in dramatic form. It depicts Jesus' journey as Wisdom's descent and return. He is the Word incarnate who comes down to earth to reveal the Father, take away the sin of the world, and empower the "children of God."

Verses 6-18 of John's Prologue summarize Jesus' journey. Like Wisdom, the Word comes into the world, is characterized by light, reveals the nature of God, calls the chosen to faith, and gives them life. Jesus' journey is one in which some recognize him and join his journey while others find it too difficult and go away; they "no longer go about with him."

John wants our journey to be one in which we accept Jesus' identity and the light and knowledge he brings into our world.

The three-year-old boy's question is a great one for communion: "Where are all the people going?" The answer is that they are going on a journey with Christ, nourished by Christ.

Augustine once defined sacrament sas "visible words"—actions that speak of the love and forgiveness of God. In communion we have the chance to recommit our journey to Jesus' journey and to experience the nourishment of the Bread from Heaven. In this sacrament, Christ unites his presence with the bread and wine and unites his life with our own, that he may live in us and lead us to his purposes. Christ draws all humanity and creation to himself and God's eternal purpose. This movement takes form and shape in the self-giving and reconciling life of the community of faith. That is where all the people are going.

And that journey, our text affirms, does not end with this life. As my colleague so eloquently and succinctly put it on his own deathbed: "Life goes on." Thanks be to God. 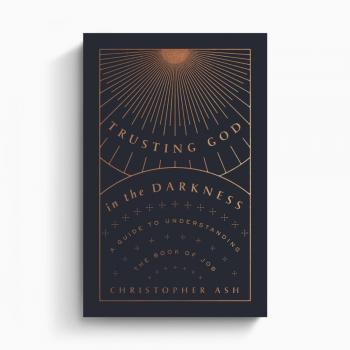 Supreme Court to consider case that could undermine Roe v. Wade: The power of...
Jim Denison
4 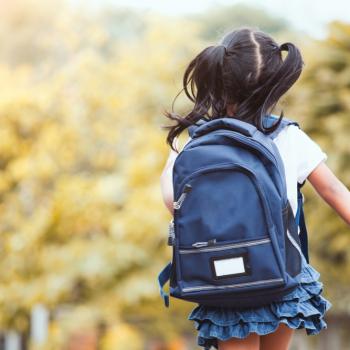 Georgia Churches Tried Recruiting Public School Kids Using Donated Backpacks
Hemant Mehta
Get Patheos Newsletters
Get the latest from Patheos by signing up for our newsletters. Try our 3 most popular, or select from our huge collection of unique and thought-provoking newsletters.
From time to time you will also receive Special Offers from our partners that help us make this content free for you. You can opt out of these offers at any time.
see our full list of newsletters
Editor's picks See all columnists