I am not your conventional geek. But The Oxford English Dictionary still holds huge appeal for me.

I've found one of its features particularly helpful from time to time. The on-line version includes a graph that tracks the use of each word by connotation and maps the frequency with which each connotation is used over time.

The interesting thing about the use of the word "spiritual," is both the scarcity and the narrowness of its use throughout most of its history. It's only late in the 20th century that its use spikes around the connotations that we associate with the word today, referring to the interior life and devotion practice of the average "Jane" and "Joe."

When that happened in the '80s and '90s what might seem pretty esoteric—that is, word usage—also reflected a huge cultural and social sea change. People weren't just using the word more often, they were rethinking their lives, looking for literature on the subject, guides to the spiritual life, and authorities or, at least, companions who could share their passion and understand their needs.

The same passion and need had its counterparts throughout religious history both in and outside of the church. But, more often than not, other kinds of language had been used. The Greek Orthodox talked about the "Christification" of the believer and Methodists talked about "sanctification," for example.

In spite of that long history a surprisingly limited number of people in the 20th century looked to the church for help. Instead, even people in the pews backed into the Christian tradition of spiritual practice through an exploration of Eastern religions, or they relied entirely on a new brand of spiritual authority that offered guidance from outside the church. Oprah Winfrey was as likely to serve as a spiritual advisor to some as was the pastor of any church.

None of this had to do with a lack of devotion. There was simply very little happening in the lives of clergy or in the life of the church that engendered confidence that those needs could be met by people who were conventionally Christian in their outlook.

Looking back on twelve years of work (which feels like a really biblical thing to do), a lot has changed:

Inevitably our student body has a bit of a regional cast, but they also come from as far away as Florida, North Carolina, Virginia, New Jersey, Oregon, and, now, Hong Kong. They are also a diverse group religiously. Historically, the task of spiritual direction was largely the work of Anglicans, Episcopalians and Roman Catholics. But today our program embraces Methodists, Disciples, Southern Baptists, Black Baptists, Unitarians, and non-denoms—to mention a few—as well as Episcopalians (and, perhaps, more surprisingly) Roman Catholics studying direction in a Protestant setting.

In addition, two annual conferences of the United Methodist Church are even making concerted efforts to establish professional networks of spiritual directors for themselves: one in Arkansas, the other in Texas.

In other words, it's fair to say that the program has not just developed with the interest that surfaced alongside the use of the word, "spiritual," it has helped to shape that trend.

Where it all goes from here is hard to say. The report back from boards of ordained ministry and denominational observers is that the work being done in spiritual formation and direction with laypeople and clergy alike has begun to re-shape the conversations that they hear.

But the study of spirituality remains in its infancy in the academy. The financial commitment to its place in seminary curricula remains fragile and in many places the work of spiritual formation remains the work of someone who does something else. Shrinking church attendance and seminary enrollments will continue to press hard on work of that kind and economies of one are likely to erode some of the gains made.

More importantly, the transformation of the church's culture is barely under way. If deeper changes are not made, local congregations will continue to lose ground.

Questions? How Do We Know We Are Doing Enough? What is Enough?
Patrick L Green
2 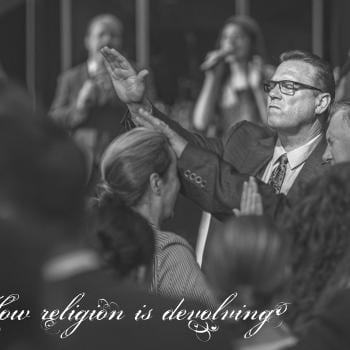 How religion is devolving
Freedom From Religion Foundation
3 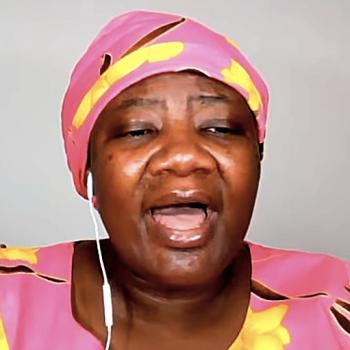 Pool Boy: Jerry Falwell, Jr. Watched Me Screw His Wife "Multiple Times Per...
Hemant Mehta
Get Patheos Newsletters
Get the latest from Patheos by signing up for our newsletters. Try our 3 most popular, or select from our huge collection of unique and thought-provoking newsletters.
From time to time you will also receive Special Offers from our partners that help us make this content free for you. You can opt out of these offers at any time.
see our full list of newsletters
Editor's picks See all columnists