Just before this scene from John's gospel, we learn that, on this same day, just as dark was turning to dawn, Mary Magdalene came to the tomb and saw that the stone had been rolled away (Jn. 20:1). Later that morning she stands weeping in the Garden locked in her grief, unable to see Jesus. She is unable to see him for two reasons: One is that tears blurred her vision. The second is that she never expected to see him again.

She runs to tell the disciples the good news, "I have seen the Lord!" Their response: to huddle behind locked doors as evening falls. I'm not judging them. They had a lot to be afraid of. They could be accused of stealing his body. They could be punished for guilt by association with his movement. It's a dark world out there. Who are we to blame them for locking themselves in?

Have you ever met anyone who is locked in?Gordon Lathrop, Lutheran liturgical scholar, once said, "You don't have to knock very hard on any door in your parish to find some sort of agony behind that door."

Knock on one in four doors and you'll find a woman who is being or has been abused, most often by an intimate partner. And you'll find little boys with big eyes watching what Daddy is doing to Mommy, being homeschooled to be future abusers. Boys who observe their mothers being abused are twice as likely to grow up to abuse their partners. "It doesn't happen that often. I know he loves me. I'm afraid of what he would do to the kids if I left. I have no skills or friends. Everything is in his name. I have nowhere to go," you'll hear the women say.

Have you ever been locked in? Do you know anyone else who has been?

In her book, Any Day a Beautiful Change, Katherine Pershey describes what it's like to be locked into a prison of fear:

Fear is a physiological response to tomorrow. It is almost always about death. Fear causes us to live in a perpetual state of anxiety. Fear is exhausting and depressing. Generally, the calamities I expect do not come to pass. So I replace them with new ones. Time and energy that could be used constructively, for prayer, dishwashing, learning to quilt, I sacrifice to cultivate apprehension (The Christian Century, "High Anxiety: The Terror of the Dark Unknown," March 7, 2012; partial paraphrase).

Sometimes I think we have more faith in our fears than we do in God, in the Risen Christ. Have you ever been locked in by your fears?

Of course, when someone or something is locked in, someone else has to be locked out.

Have you ever been locked out?

That summer long ago I was serving as the summer Duke University intern in the little town of Aberdeen, North Carolina. I had not yet been to seminary. I had not yet had a preaching class. Yet there I was. My senior pastor assigned me my first sermon. I don't even remember the text. I typed up my sermon, which was basically a little lecture on all I had learned from the commentaries, placed it on the front seat of my 1972 Dodge Dart, and drove from Miss Mary Hoopert's house (where I was staying) to the church.

I had told my parents in Pennsylvania I was preaching my first sermon. Unfortunately they had spilled the beans to the extended family that lived in North Carolina. So as I pulled up, I saw, with horror, another car pull up beside me. It was filled with my three North Carolina uncles (Uncle Jim, Uncle Bill, and Uncle Horace and their wives Aunt Lucy, Aunt Catherine, and Aunt Louise). As they waved cheerily at me, I got out of the car and locked my keys and sermon manuscript inside. Have you ever been locked out?

I still remember that helpless feeling of being locked out. Locked out is how we feel when a child is trapped in an addiction or job situation and you can't break through to make it all better, to make them want help. Locked out is how we feel when someone we care about is filled with guilt and self-loathing. We keep assuring them they are forgiven, but they just aren't buying the fact that this good news is for them.

Locked out is how we feel when we read poverty statistics and wonder how things will ever change if we continue with politics as usual. Locked out is how those being discriminated against feel when they look at the worlds that are open to those who aren't. Have you or anyone you know ever been locked out?

Apparently Jesus hasn't. There are no walls thick enough to block the entry of the Risen Christ into the inner sanctum, the safe room the disciples had created at the center of their fears. But he is no apparition who pops in for a visit to wish the disciples well. He had a spiritual body, as Paul calls it in 1 Corinthians 15:44. He has a transformed body, as Paul calls it in 1 Corinthians 15:51. This body is not purely spiritual or physical, but is a unique sort of personal identity (Kysar, 159). The resurrected Christ who passes through locked doors is the same one who then shows the disciples his hands and his side (20:20). He has a body, and he has come into our locked rooms, not just to visit, but bearing gifts that can heal a hurting, hostile world. 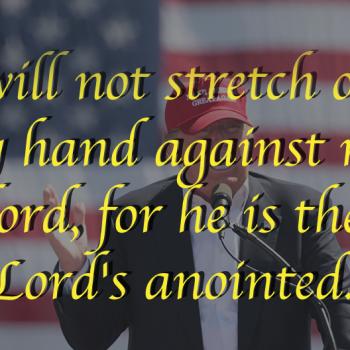 Take Your Love to the Altar
Paul Louis Metzger
Get Patheos Newsletters
Get the latest from Patheos by signing up for our newsletters. Try our 3 most popular, or select from our huge collection of unique and thought-provoking newsletters.
From time to time you will also receive Special Offers from our partners that help us make this content free for you. You can opt out of these offers at any time.
see our full list of newsletters
Editor's picks See all columnists