One rabbi friend of mine now embraces atheism, especially after he had seen the photograph of a relative, taken in one of the deadly camps, sometime before his annihilation in an oven. This rabbi continues to serve a Jewish congregation, but he can no longer believe the ideas that first brought him to the rabbinate. For him, there is only now the community, bound one to the other.

Lamentations speak here, too. "But you, YHWH, reign forever; your throne endures to all generations. Why have you forgotten us completely? Why have you forsaken us these may days? Restore us to yourself, YHWH, that we may be restored; renew our days as of old—unless you have utterly rejected us, and are angry with us forever!" (Lam. 5:19-22) And that is the end of the book! The great and traditional faith statement of 3:22 is now set over against the deep anguish and wonder of the end. Is YHWH's faithfulness great, or has YHWH forgotten us forever? Like my rabbi friend, Lamentations is finally not so certain.

Third, there are Jews who can no longer embrace the traditional views at all after the Shoah. Elie Weisel, in his searing memoir, Night, describes a scene that no one reading it can ever forget. A very young inmate at Auschwitz is hanged by the Nazis for some ridiculous infraction of the camp rules, and many prisoners are forced to watch the execution. The boy is light in weight, and it takes him a long time to die. One prisoner cries out, "Where is God now?" And Weisel answers, "There he is, hanging on that gallows." When some Christians read this passage, they attempt to read the crucifixion of Jesus into it. This is not to read what Weisel is saying, but rather to read into his words what one would like to find. Weisel means in fact that the traditional God of Judaism is now dead, hanging on the gallows of the Shoah. Then what are we to do without this tradition? Weisel answers by saying, "We continue to tell the story," for that is finally all we have.

One can imagine that some who were there in Jerusalem during those days, as they witnessed cannibalism (Lam. 2:20), rape (Lam. 5:11), and the starvation and death of babies (Lam. 2:11-12), must have joined Weisel in sensing that the old beliefs were no longer possible. The memorable book of Lamentations could urge a preacher to get real about the dangers and difficulties of faith in a world gone mad. When the promises of God for land, priest, Davidic king, and temple are all gone in a rush of Babylonian blood lust, faith becomes compromised and difficult and seriously questioned. When the hopes of ease and comfort and success are snatched away in economic chaos, terroristic plots, and personal health challenges, faith can be compromised and difficult and questioned. The reality of Lamentations presents us with our own realities and offers genuine and truthful resources for tackling these huge questions once again.

New TV shows about Esther and Jesus in the works
Peter T. Chattaway
2 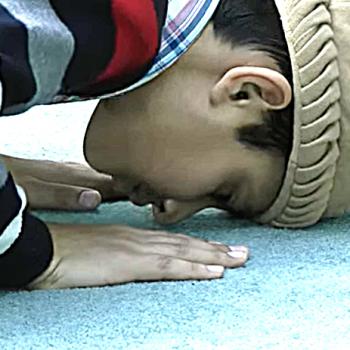 The Marjorie Taylor Greene Twitter Attack On Chinese Food
Andrew Hall
Get Patheos Newsletters
Get the latest from Patheos by signing up for our newsletters. Try our 3 most popular, or select from our huge collection of unique and thought-provoking newsletters.
From time to time you will also receive Special Offers from our partners that help us make this content free for you. You can opt out of these offers at any time.
see our full list of newsletters
Editor's picks See all columnists