John shapes his narrative account of Jesus' life, death and resurrection so that it is this last encounter—the story of the raising of Lazarus—that is the straw that breaks the camel's back. The other signs, while threatening to the religious professionals in power in Jesus' day, had some parallels with the claims of wonder workers and healers who were part of the volatile mix of religions of Jesus' day. But John wants the reader to understand that raising someone from the dead was the act to end all acts. One who could give life could not be allowed to live. One who could bring men and women back to life must be killed. Jesus offers a death threat to death, and it proves too great to allow him to live.

The story of the raising of Lazarus is a highly complex, nuanced story. It projects multiple sparks of potential significance. Every time I study it, I catch a different one. So this time around, here is the lesson I see in the raising of Lazarus. It is the opposite of the lecture the physical therapist gave my father-in-law. Though I will say that it was effective. He walked one hundred steps with his walker yesterday.

A clergy colleague of mine told me about the worst funeral she ever conducted. It was for the infant of a young couple whose family was on the rolls of the church she was serving, but had no ties to a faith community themselves. In her visits to the couple, the young father insisted she say the baby was sleeping and that she refer to the coffin as a crib. During the service he came in late, drunk and highly distraught and attempted to lift the child from the coffin. My colleague says it was the worst display of raw grief she has ever witnessed.

John Wesley once said (I paraphrase here) that it is as much a miracle that God can raise dead faith to life as that God raised Jesus from the dead. When faith is dead and hope is lost, there is only the power and presence of God.

I confess that if I were to read this column up to this point, I'd ask myself as the author two questions in the Comments box. If God has the power to resurrect faith, why doesn't it always happen? And, doesn't God have to have a little something to work with within us to strike a spark?

All I know is that in John's Gospel, the narrative is shaped to build toward the drama of Jesus raising someone from the dead. All I know is that the power to give life is the ultimate threat Jesus poses to the powers that be of his day and ours. The lesson of the raising of Lazarus, as it foreshadows the raising of Jesus, is that nothing in the hearts of human beings or the structures of society has the power to prevail over God's power to resurrect God's Son. All the Gospel of John is saying is that God's Son, the Word made Flesh, is now with us bringing that resurrecting power to our inner lives and our world. 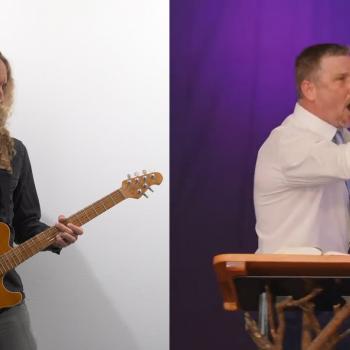 This Heavy Metal Remix of a Hate-Preacher's Sermon Almost Makes It Bearable
Hemant Mehta
Get Patheos Newsletters
Get the latest from Patheos by signing up for our newsletters. Try our 3 most popular, or select from our huge collection of unique and thought-provoking newsletters.
From time to time you will also receive Special Offers from our partners that help us make this content free for you. You can opt out of these offers at any time.
see our full list of newsletters
Editor's picks See all columnists