Things Are Seldom What They Seem: Reflections on Judges 4:1-7


It is a special pleasure for me to have this particular text show up in the lectionary for this year. If any preacher takes the book of Judges with any seriousness (and I fear their number is few), and if those few have a look at the story of Deborah, the only female judge of an emerging Israel, they are usually attracted to the long poem of chapter 5, often counted by scholars as among the oldest portions of scripture that we have. Besides, it is a cracking good poem, filled with martial war cries, subtle and murderous deceptions, and ends with a weeping mother, awaiting the return of her son from battle, a son we know has been impaled on the floor of a supposed friend's tent. And all that may be over 3,000 years old!

I admit that I spent whatever time I gazed at the story of Deborah pondering that poem, filled as it was with amazing human insight, not to mention a thicket of grammatical conundrums to warm the heart of the most committed Hebrew language nerd. Rarely, did I give much thought to the prose version of the story found in Judges 4.

However, I now find that prose account replete with wonderful material that focuses a very surprising attention on issues of gender and its expectations in the ancient world. I little expected to discover in an apparently heavily edited piece of Deuteronomic writing a host of subtle assaults against the patriarchy, but that is precisely what I found. This one short article does not afford the time to demonstrate this reality in full, but I can suggest a number of textual facts to prove the point. (For a much fuller account of all this, you may read my chapter on Judges 4 in my book, Telling the Whole Story. How's that for self-promotion?)

The tale in Judges 4 begins Deuteronomically enough. Israel sins again after the death of the heroic Ehud (see Judges 3 for that grisly story), and YHWH promptly "sold them into the hand of King Jabin of Canaan, who reigned in Hazor" (Judges 4:1-2). Historically, there never was a "king of Canaan." The northern ring of cities associated with the culture of those we loosely call Canaanites, were likely independent city-states, ruled by tribal leaders who could only be named kings by small groups living in that particular city. Hazor was one of those places, and Jabin was titular ruler. Hazor was one of the cities that the "invading" Israelites were in no position to conquer, despite the fulminations of the book of Joshua.

Jabin's army is commanded by General Sisera, who apparently controls all those in range of his vast force of "900 iron chariots" (Judges 4:3). There is something of an irony in this description of the weapons at Sisera's disposal. On the flat plains of the Mediterranean coast, a phalanx of 900 iron chariots would indeed be a formidable, if not unbeatable, array of charging tanks. Flying chariots, pulled by powerful horses, and manned by both driver and archers, would appear to a soldier on foot, armed with spears and axes, as horrifying instruments of death. Yet, in the shale-covered Israelite highlands, chariots were not usually the weapons of choice; it was certainly this geographical reality that spared ancient Israel from annihilation by the long-established cities of the Canaanites.

Still, Sisera appears to be a potent general, commander of a fearsome force of chariots. In the face of his twenty-year tyranny, the "Israelites cried out to YHWH for help" (Judges 4:3). But this time YHWH's gift of help is most unexpected. Judges 4:4 makes the point remarkably. "At that time Deborah, a female prophet, wife of Lappidoth, she was judging Israel." Just look at the cascade of feminine nouns in that sentence! "Deborah" possesses the feminine ending on the word for "leader" or sometimes even "priest"; she is described as "female prophet," again with the feminine form of the familiar word for prophet, nabi; even her husband, who never appears in the story, has a name with a feminine plural ending; finally, the narrator adds the pronoun "she," unnecessary for the grammar of the sentence, but emphasizing the point that Deborah is YHWH's choice as judge, and she is decidedly a woman. The storyteller does not single that fact out directly, but by four noun forms we must have no doubt of this judge's gender.

Yet, Deborah first appears to us to be a decidedly different sort of judge from those preceding her (Shamgar, Ehud) and those following her (Gideon, Jepthah, Samson, in particular), because she is what we moderns think of as a judge. She is a legal expert, sitting in her office under a palm tree that bears her name, and dispensing judgment to all who come her way (Judges 4:5). This is a far cry from the over-sexed and slaughtering ways of Samson, the rash violence of Jephthah, and the casual idolatry of Gideon. But she soon takes a military turn and summons Barak, a martial leader in Israel, and demands that he go to Mt. Tabor with 10,000 troops to confront the mighty Sisera, and she promises "I will give him into your hand" (Judges 4:7). 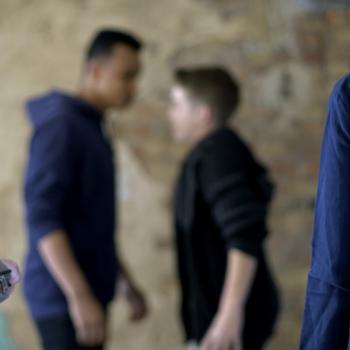 We All Want What Isn't Yet, to be Better
Sherry Antonetti
3

UFOs Are Angels
Kermit Zarley
Get Patheos Newsletters
Get the latest from Patheos by signing up for our newsletters. Try our 3 most popular, or select from our huge collection of unique and thought-provoking newsletters.
From time to time you will also receive Special Offers from our partners that help us make this content free for you. You can opt out of these offers at any time.
see our full list of newsletters
Editor's picks See all columnists