I admit to a momentary cringe when I see 2 Samuel 7 on the lectionary's docket. Of all the chapters in the wonderful and rich saga of the books of Samuel, this is the one that excites me least. On the surface at least it appears that an ideological Deuteronomic editor has seized the text by its throat and forced it to say what he wished it to say, namely that YHWH is best followed by "keeping all the laws and statutes," by uttering fawning prayer to the YHWH who chose Israel, by acting, in short, in the ways that the book of Deuteronomy says one is to act in order to receive the goods and services that YHWH always supplies to the faithful. I find such claims hogwash, if I may use a technical theological term. The astonishing saga we have been reading up to now over and over gives the lie to such simple beliefs. Not to mention the book of Job that throws all of it into an Israelite cocked hat. Read like this, 2 Samuel 7 is nothing but a nauseating sore thumb protruding from a sly, ironic tale that always keeps its readers delightfully guessing. Is there another way to hear this thing?

I think there may be, but the context of the figure of David is crucial for the attempt. Before I proceed with what will appear to be a decidedly slanted view of this chapter, I readily admit that the chapter has become important for Christians due to its promise of "an eternal Davidic house" of which Jesus of Nazareth becomes the chief member. The Gospels of the New Testament go out of their way to connect Jesus to the house of David, all the better to convince readers that Jesus is the direct heir of David's eternal house, promised by YHWH in 2 Samuel 7. That particular use of the chapter by the writers of the New Testament has no final bearing on the reading I want to provide here, but I want you to know that I know about this long-time connection.

What do we know of David prior to this chapter? Is he ever finally to be trusted to tell us the unvarnished truth about much of anything that his hand touches? Not bloody likely! Again and again, he molds the facts of his actions, and the actions of those around him, to fulfill his own particular desire for the throne of Israel. As an example, one I tried to elucidate several weeks ago, David composes his epic on the deaths of Saul and Jonathan, but turns the poem toward his own advantage at several critical junctures. Later, of course, as we all remember too well, he has a fling with Bathsheba, has her husband Uriah murdered after trying to hide the affair, and then blithely marries the woman after a very short period of mourning. David is ever the crafty, self-protective, self-aggrandizing one. Why should we imagine that the long prayer that closes 2 Samuel 7 is any different, despite its richly propagandistic appearance?

He begins with what sounds like appropriate humility. "Who am I, Lord YHWH, and who is my house that you have brought me this far?" It is of course quite easy to play the role of humble servant when one is sitting in the cat-bird seat on the throne of Israel, devoid of rivals, seemingly beloved by all. "Yet, this was a small act in your eyes, Lord YHWH. And you have also spoken of the house of your servant into the far future; let this be humanity's Torah, Lord YHWH!" (2 Sam. 7:19) Right here my suspicions begin to rise. David first says that YHWH's actions for him up to now have been but a small, trifling thing, but the still greater divine action is YHWH's gift to David's house of an eternal covenant. That David lauds as YHWH's greatest action of all. Yet, instead of receiving this amazing gift from YHWH with genuine humility, David says, "Let this be Torah for everyone henceforth!" In other words, my eternal kingship is for David nothing short of a universal bit of instruction for all the world! May it be Torah forever, he shouts, and his prayer suddenly becomes a demand that his future and the future of his house become the center of the world's history. It is an astonishingly arrogant claim!

The prayer returns to the usual announcement and recognition of YHWH's choice of Israel and YHWH's protection of them in all things, both certain signs of YHWH's greatness and goodness (2 Sam. 7:20-24). But then David turns once again to his own future as king and as progenitor of kings, demanding that YHWH make that gift completely certain and without qualification. "And now, Lord YHWH, about that word you have spoken concerning your servant and his house, fix it forever; act exactly as you have spoken" (2 Sam. 7:25). Make no mistake, YHWH, shouts David, you have spoken and promised and I now hold you to that promise. "Your name will be made great forever in the saying, 'YHWH of the armies is God over Israel, and the house of your servant David will be established in your presence'" (2 Sam. 7:26). Note carefully the import of that sentence. YHWH's name can only be accounted great when all learn the new saying that David has just this moment concocted: YHWH is God over Israel and David is forever established in YHWH's presence. No longer is it enough to believe only that YHWH is God over Israel; now all must further believe that YHWH's greatness is forever connected to David's eternal kingship. A sweepingly arrogant claim!

Eschatology: a Forgotten Theology for Our Perilous Time
Jeff Hood
2 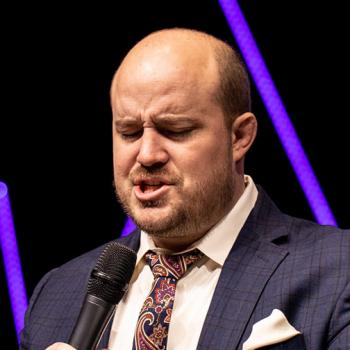 God told evangelist that 'Trump would become a trumpet'
Barry Duke
Get Patheos Newsletters
Get the latest from Patheos by signing up for our newsletters. Try our 3 most popular, or select from our huge collection of unique and thought-provoking newsletters.
From time to time you will also receive Special Offers from our partners that help us make this content free for you. You can opt out of these offers at any time.
see our full list of newsletters
Editor's picks See all columnists