Episodes of television dramas often begin by flashing across the bottom of the screen "Five months earlier" or "Two years ago" and then begin with a flashback to bring us up to the present action.

I would bet that the baptism of Jesus by John the Baptist was a frequent flashback in both their minds as their lives moved on from this high point in Matthew 3:13-17. Movies, television shows, plays, all have titles that summarize their theme. I'd title this particular episode in the lives of both John and Jesus "Cousins."

They are cousins—close in family relationship. Their mothers, pregnant at the same time, were great friends. They were close in birth, born just months apart. John the Baptist; his cousin Jesus. They grow up, vigorous, strong-minded young men. They come together in this baptismal scene. They have a conversation and an interaction. No other direct conversation or interaction is recorded in the gospels.

Soon after this baptismal scene we are told in Matthew 4:12 that Jesus learned John had been arrested. Mark 4 and Matthew 14:1-12 fill in the reasons for his arrest: John objected to Herod's relationship with his brother's wife. In response, Jesus withdraws to Galilee. Then he begins his ministry with the very same words uttered by John to the crowds in Matthew 3:2: "Repent, for the kingdom of heaven has drawn near" (4:17). He calls his first disciples and begins to teach, heal, exorcize, and make powerful religious leaders and politicians wish he had never been born.

As he calls and commissions his twelve disciples and moves from city to city, teaching and healing the crowds, I imagine that, in the back of his mind, there's often an image of his cousin and a flashback to this baptismal scene. As he imagines John, caged like a trapped animal, I wonder if he pictures John's flashing eyes, disheveled hair, determined stance, and rough, ragged robe. I wonder if he hears John's rough, ragged words, "Repent, for the kingdom of heaven has come near...one who is more powerful than I is coming after me; I am not worthy to carry his sandals... even now the ax is lying at the root of trees; every tree that does not bear good fruit is cut down and thrown into the fire" (3:2, 3:10-11).

Sometimes you and I carry on inner conversations with people in our lives. I wonder if Jesus ever had inner dialogues with his absent cousin: "Cousin John—never afraid to say what people never want to hear. Dear cousin John, you see the judgment side of the kingdom so vividly...every time I rebuke, correct, or challenge tradition I feel you're at my side, nodding your great mane of hair approvingly. But every time I say the words 'Your sins are forgiven,' I picture you at my side, warning me 'Cousin Jesus, don't forget the judgment in the forgiveness.'"

At the very moment Jesus is teaching the crowds, with his cousin on his mind, John is pacing the parameters of his cell, picturing his blameless cousin coming to the river to be baptized, and, lately, hearing reports of his healings, his acts of forgiveness, and his exorcisms. I wonder if he spoke aloud to his cell: "Cousin Jesus, your mission as Messiah is to judge, to separate the sheep from the goats. I stood up in front of large crowds and told the crowds you had a winnowing fork in your hand, and that you would gather in the wheat and burn the chaff with unquenchable fire. Did I overstate the judgment in your ministry? Because from what I hear, you are just as much about mercy. From what I hear your winnowing fork has turned into a divining rod. Whenever you see a sinner you make a beeline toward them to give them a second chance."

In Matthew 11:3 we learn that John from prison sent his disciples to ask Jesus, "Are you the one who is to come or should we wait for another?" Jesus' response was something like this: "Dear cousin, I make no great claims about myself but look! The blind receive their sight, the lame walk, the lepers are cleansed, the deaf hear, the dead are raised, and the poor have good news brought to them. I make no great claims about myself. I only know that in my words and deeds the kingdom of God spreads itself out upon the face of the earth! You were right, cousin John, it is a kingdom of judgment because people need to be warned to repent. You are right, because people need to be strengthened and encouraged to repent and amend their lives. But it is also a kingdom of mercy. Words of judgment and warning must come from one who loves and forgives and heals them."

So John's disciples returned to John and whispered Jesus' words through the bars of his cell. We don't know if John learned a lesson from his cousin's words that the kingdom included healing and mercy as well as judgment. We do know that Jesus learned a lesson from John—that judgment was an abiding part of the kingdom. After John's disciples turned to go back to John, Jesus turns to the crowd who had rejected John's teachings as too harsh and supports his cousin. In 11:7-11 Jesus upbraids the crowd for being offended by John and allowing him to be caged. Jesus is saying, "If you follow me, remember I'm related to him.

We are cousins. His passion for righteousness is in my blood, the fire in his eyes for justice burns in mine."

John the Baptist and Jesus are cousins in the same way that judgment and grace are cousins. Taken together they witness to the truth that the gospel sounds like bad news before it is experienced as good news; the gospel must lead to justice if it's going to bring joy. 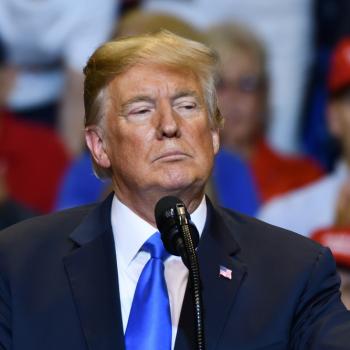 Believe It Or Not, Modern Day Witchhunts Still A Thing
Gwyn
Get Patheos Newsletters
Get the latest from Patheos by signing up for our newsletters. Try our 3 most popular, or select from our huge collection of unique and thought-provoking newsletters.
From time to time you will also receive Special Offers from our partners that help us make this content free for you. You can opt out of these offers at any time.
see our full list of newsletters
Editor's picks See all columnists