Her Extravagant Holiness: Reflections on John 12:1-8

L. Gregory Jones, Professor of Theology at Duke Divinity School, tells the story of how, years ago, he was invited to preach at an Episcopal church in another city. He decided to preach on the anointing of Jesus by Mary at Bethany. They wrote him and asked him to send them his title, which he did. Sunday morning came and he sat up front, robed and ready to preach, reading through the bulletin before the service began. Running his eyes down the bulletin, he came across the following introduction: "This morning, we welcome to our pulpit our guest speaker, His Extravagant Holiness the Rev. Dr. L. Gregory Jones."

I gave a series of lectures and sermons recently at a United Methodist church in the town where I live. When I arrived that Sunday morning, I learned that the Sunday before, one of the pastors had given me an overly glowing introduction in which he informed those present that the special guest (me) who was coming the next week was the president of the World Methodist Council.

I had served on the council a few years before, but I had no idea I was now the president. It is the first time anyone has ever gotten me confused with Bishop Paulo de Tarso Oliveira Lockmann of Brazil. I have taken two semesters of community college Spanish, but I can't recall ever having been to Brazil. The introduction made me look impressive. The only trouble was, the facts were wrong.

Today, Mary is the one whose role it is to introduce Jesus, our special guest. Who is she, the introducer? She is the sister of Martha and Lazarus. We read this John text with Luke 10:38-42 in our minds. There we are told that Jesus stopped "at a certain village" (Bethany?) and was served a meal in the home of two sisters, Martha and Mary. Martha bustled around serving in a worried, distracted manner. Mary sat at his feet listening to what he was saying. Jesus praises Mary for choosing "the better part which will not be taken away from her" (Lk. 10:42).

There are several accounts of women who anointed Jesus in the gospels. There is the "sinful woman" in Luke 7:36-50 who crashes a dinner at the home of one of the Pharisees. She brings an alabaster jar of ointment and anoints Jesus' feet with ointment, tears, and kisses. Mark 14:3-9 and Matthew 26:6-13 tell the identical story of an unnamed woman who brings an alabaster jar of very expensive ointment and pours the ointment on Jesus' head as he dines at the home of Simon the leper in Bethany. Both the accounts in Mark and Matthew, like this one in John 12, are sandwiched between the plotting of Jesus' enemies to kill him (Mk. 14:1-2) and Judas Iscariot leaving the dinner to go to the chief priests to betray Jesus (Mk. 14:10-11).

Who is this Mary who introduces Jesus in John 12? She is Mary, the sister of Lazarus. The meal is held at the home of Lazarus whom John specifies was the man Jesus had raised from the dead (Jn. 12:1). She has sat at his feet and now anoints his feet. She hasn't misunderstood his title or misread his résumé. She knows exactly who he is and the kind of honor he is due. He deserves an act of extravagant holiness. The smell of perfume amid the stench of betrayal, jealousy, and looming violence. A sweet moment of stillness amid a gathering storm. An outpouring of homage amid the onslaught of hatred.

Today, six days before the Passover, Mary pours out a lavish amount of nard, anoints Jesus' feet with it, and wipes them with her hair. By this extravagant act, Mary introduces Jesus to anyone who still doesn't know who he is. She anoints him beforehand for burial, because he is or will soon be the lamb slain, the crucified Messiah. She carefully and reverently cleanses his feet, because he is the Son of Man who came not to be served but to serve, who will soon perform the same service for his disciples (Jn. 13:1-11). She lovingly bathes his feet because, after the Resurrection (as Mary Magdalene discovers in John 20:17), the opportunity to offer physical comfort and affection to the earthly Jesus will be a thing of the past as he prepares to ascend to his Father.

By her actions, she says, "I would like to introduce Jesus, the lamb of God who takes away the sins of the world, the suffering, serving Son of Man, the Son of God who, for a little while, gave us the opportunity to sit at his feet. I would like to cherish him for one bright, fragrant moment, before the sewage of hatred and violence washes over him and carries him away."

Yes, it's an extravagant introduction. A picture of Mary anointing Jesus' feet could be next to the word "extravagant" in the dictionary. Is it dramatic and exceeding the limits of reason or necessity? Yes. Is it lacking in moderation, balance, or restraint? Yes. Is it extremely or unreasonably high in price? Yes.

But so is what Jesus does for us.

No existing title does him justice. No introduction could be too flattering. He is the Son of God about to die at the hands of those who can't stand to let such an outpouring of love as his go unstaunched.

There are plotters, betrayers, and bystanders in this story. But there is only one introducer. It is my honor to introduce to you today Her Extravagant Holiness—Mary, the anointer of Jesus at Bethany. 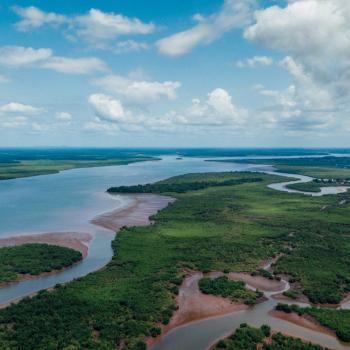 A Little Fresh, A Little Salty: What to Expect from My New Blog
Kelley Mathews
3 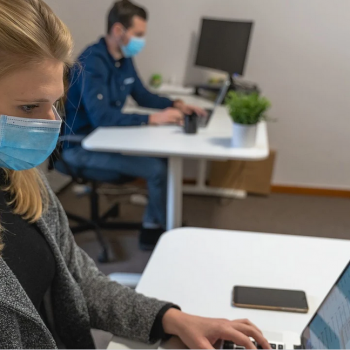 Why Do So Many Leaders Screw Up the Return to the Office?
Gleb Tsipursky
Get Patheos Newsletters
Get the latest from Patheos by signing up for our newsletters. Try our 3 most popular, or select from our huge collection of unique and thought-provoking newsletters.
From time to time you will also receive Special Offers from our partners that help us make this content free for you. You can opt out of these offers at any time.
see our full list of newsletters
Editor's picks See all columnists