The Gospels of John E and John L

What do John the Evangelist and John Lennon have in common? Both are dead. Beyond that, not much.

But lurking behind some of the responses to last week's column on the Eucharist and—more importantly—behind much of what passes for Christian expression in today's mainline church is the assumption that there really isn't much difference between the two of them at all. They both believed in love and, after all, "love is all you need." (Or that was certainly what I was told last week.)

The difficulty, of course, is that John's Gospel plainly does not believe that love is all we need. In fact, John goes out of his way to juxtapose truth and love as equally important parts of a community that is distinguishable from the world because it chooses to follow Christ. See, for example, John 17:14-26. For most of Christian history the church has agreed. Even a Saint who regularly wins secular brownie points, like Francis of Assisi, was clear about the necessity of something more than love:

Listen, little poor ones called by the Lord,
who have come together from many parts and provinces:
Live always in truth,
that you may die in obedience.

That's quite a stiff dose of spiritual discipline from someone G.K. Chesterton once observed has been characterized by those who should know better as "the world's one quite sincere democrat."

So, how did we find ourselves in a religious environment in which we so quickly and easily dispense with expectations that accompany discipleship?

There are undoubtedly a number of explanations:

The privatization and individualistic nature of American spirituality is one of them. When you live in an environment where "my faith is my business and your faith is your business," urging people to live in a particular understanding of the truth and to die in obedience is an outrageous violation of autonomy.

The eclectic and commodified nature of American spirituality is another factor. As Elizabeth Lesser puts it, the "New American Spirituality" (which is, by the way, just the old American spirituality) invites people "to string a necklace all their own." The net result is customized spirituality. So why not quote Francis' prayer of serenity and ignore the God to whom Francis prayed?

And then there is the anti-intellectualism of our culture that is deeply invested in the complexity of our technology, but strangely assumes that contemplating the Lord of heaven and earth ought to be simple.

But another problem lies in the way that the church itself has been teaching (or not, really) the Christian narrative. On balance, I think that what most Americans hear is this story: Once we were perfect, life was good, we lived forever, and God was okay with us. Then we screwed up (and/or our primal parents screwed up) and suddenly we were damned and going to hell. So, after several abortive attempts, God sent his Son Jesus to earth to die for our sins, so that by believing in Jesus we could get our names moved from the column labeled, "damned and going to hell," to the column labeled, "saved and going to heaven."

In the meantime, we try not to spoil the whole deal and God has a bunch of rules (most of them unreasonable) that are designed to keep us out of trouble. (Though truth be told, he probably put some of them in there to trip us up.) In any event, if we don't mess up too badly we die and go to heaven—and let's just hope that it isn't really all about sitting around in choir robes singing those old, tired hymns. (But that remains to be seen . . . literally.)

There are far too many problems with this cartoon version of the Christian narrative to correct in the space of just one column. But notice two things that are fundamentally broken about it.

One, the whole narrative is all about us and who would know better than us about what we need? After all, this is a patch job—a performance problem. So the whole thing about living an alternative life just isn't really necessary and you can hardly argue that John E's Gospel should dominate our lives. John L's Gospel is far more comfy, you can hum a few bars, and—after all—the biggest mistake we make is probably that we aren't loving enough, so all we really do need is love.

And because it isn't all about us we can't opt out or work on our own best guess about what we need. God is calling the shots.

The second problem is that this narrative decouples following God and the way we live. After all, the only really spiritual thing going on here is getting our names moved out of that damned "damned" column. The ethical stuff—never mind the doctrinal stuff—is a separate deal, it's annoying, and it's an imposition. We all know atheists who are noble and good anyway, so what's the big deal. 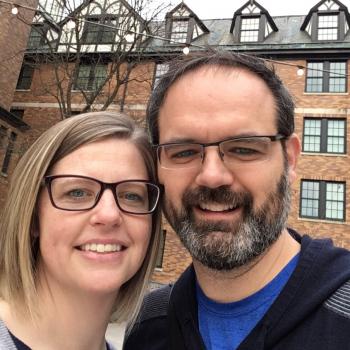 on the need for a video platform
Jared Ingle
2

Salvific Suffering and a Possibility of Meaning
Jonathan MS Pearce
Get Patheos Newsletters
Get the latest from Patheos by signing up for our newsletters. Try our 3 most popular, or select from our huge collection of unique and thought-provoking newsletters.
From time to time you will also receive Special Offers from our partners that help us make this content free for you. You can opt out of these offers at any time.
see our full list of newsletters
Editor's picks See all columnists