Many Members, One Body: Reflections on Romans 12:1-8

The Church at Rome apparently needed a lesson in unity. The lengths Paul goes to in establishing that Jews as well as Gentiles will be forgiven and accepted by God points to conflict within and around the Church at Rome. Paul needed a positive metaphor to express the kind of unity that is Christ's hope for the Church.

I wonder what made Paul think of this body metaphor, not only here in Romans but also as a prominent metaphor in 1 Corinthians. Maybe it was his awareness of how fragile the body was in his first-century context. Maybe he woke up one day grateful that he had made it this far. "The body is a fragile thing. I am so lucky that I was not one of the 25 percent of infants who died before age one. Or the 50 percent of children who died before age ten. I am lucky I haven't lived in a city my whole life but have traveled in the open air, because cities are a breeding ground for disease. I am fortunate that I haven't come under the care of a quack doctor whose home remedies made from herbs and leaves often do more harm than good." The body is a fragile thing. We should be grateful for it. We should take better care of it. We should realize all its parts need one another and need to work together to survive and thrive in an often hostile environment.

What made Paul think of this body metaphor for the church?

Maybe his mind wandered to visits he had paid in the past to shrines to Asklepio in various cities he had visited. Asklepios was the god of healing. If you had an infirmity, you presented him with an offering of honey cakes, then slept overnight in the temple. The god would appear to you in a dream and heal the affected body part. Then you would have a terra cotta model of it made and place it on display at the shrine next to the bathing pool. The visitor, as they sat by the pool at Asklepios's shrine, could contemplate the body parts on the wall, replicas of all kinds of body parts supposedly healed by the god (heads, hands, feet, arms, legs, breasts, genitals, eyesm and ears). And in his mind's eye, perhaps the thought appeared: "What life do any of the members have unless they are joined together in a living body?"

A couple of years ago a clergy friend of mine asked me to serve as the guest preacher at her church in a small town east of Dallas, Texas. My friend introduced me and then the acolytes came forward to light the candles. They were two girls, about ten years old. One, a smiling, meek looking girl, the other, obviously the lead sled dog acolyte, a look of determination and singleness of purpose on her face. This candle lighting was going to be done right. She had some trouble with her wick, but deftly trimmed it and got the job done and then came to sit down. Unfortunately my host had forgotten that, with my being there, the front line up was one seat short. The lead sled dog acolyte stood in front of me, looked up at me, and said, "You're in my seat." My friend came over and tried to lead her away and suggested that both girls share one seat. My acolyte friend looked disapprovingly at me. Clearly this was not acceptable. I thought, "Well, there is only one solution here. I went down into the congregation, picked up a chair and took it up for her. Fortunately for us both, the chairs were the kind that separate and lift off the floor.

Maybe she was just a bratty little girl who needed to learn to respect her elders. Judging by the expression in her mother's eye when she came up after the service, I suspect that was her take on the scene. But for me she was a reminder that every member of the body deserves a front row seat.

When Paul says, "You are the body of Christ," he doesn't mean that the church literally is Christ's body in every way, so as to be without error or flaw. He means that the church is a body that belongs to Christ. The Church is a body that gives Christ a face to the world, his voice, his hands, and his feet. This is why, when Paul was persecuting Christians before his conversion, Jesus said to him on the road to Damascus, "Saul, Saul, why are you persecuting me?" We are all imperfect members, but we all belong to Christ.

I still remember the desperate, vulnerable look in Frank's eyes when I opened his door that Sunday. I expected to see my single, quadriplegic friend dressed and ready to accompany me to church; instead, I was confronted with a horrible sight. Frank's motionless body lay rigid and sweaty under his sheet. A full urine bag and an empty water cup with a straw near his mouth meant only one thing—no helper had come to care for him! A worker's scheduling mistake had left Frank alone and ignored for hours, incapable of doing even one simple thing for himself. With parched mouth, he had cried out for help. He expressed gratitude and relief as I rushed to aid him, my spirit filled with compassion. 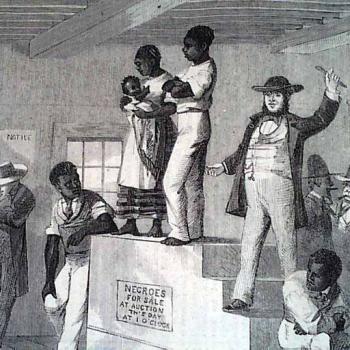 Every Town is Money
Mary Pezzulo
Get Patheos Newsletters
Get the latest from Patheos by signing up for our newsletters. Try our 3 most popular, or select from our huge collection of unique and thought-provoking newsletters.
From time to time you will also receive Special Offers from our partners that help us make this content free for you. You can opt out of these offers at any time.
see our full list of newsletters
Editor's picks See all columnists