What we saw here was a politician explaining why he believes something to be the right decision, even though it will cost him votes. As someone who has recently written about the President's failure—alongside the failure of many other politicians—to stand up for their beliefs and tell the truth, I thought this was, well, refreshing.

But there are plenty of people who will see this stance as unchristian. Why does Mr. Obama believe—in the face of opposition from the Catholic bishops and conservative evangelicals—that support for gay marriage is theologically defensible?

In his response, the President cited the Golden Rule, a theologically-simple yet truly profound way of understanding the core of Christian belief. Karen Armstrong, the former nun who has become one of the world's great writers about religion, notes that compassion is at the heart of every legitimate faith. In this excerpt from her book Twelve Steps to a Compassionate Life she explained its importance:

All faiths insist that compassion is the test of true spirituality and that it brings us into relation with the transcendence we call God, Brahman, Nirvana, or Dao. Each has formulated its own version of what is sometimes called the Golden Rule, "Do not treat others as you would not like them to treat you," or in its positive form, "Always treat others as you would wish to be treated yourself." Further, they all insist that you cannot confine your benevolence to your own group; you must have concern for everybody—even your enemies.

Saint Isaac of Syria insisted that the core of the Christian spiritual life was the development of a compassionate heart, and he made it sound like what it is: work. Compassion is counter-cultural, and perhaps even counter-intuitive. It's not our natural human response in most cases, that's for sure. Think of Jesus instructing us to love our enemies, to forgive those who have wounded us, to return kindness for injury. If we didn't need to be reminded of this, Jesus and the Christian tradition wouldn't speak about it so often.

There are more sophisticated theological arguments than simple compassion to make defending gay marriage—and I explore them in Faithful Citizenship -- but, really, the President did just fine. We can't say that we love and respect others and simultaneously deny them such a fundamental right as the possibility of sharing life with the ones they love.

For progressives like Mr. Obama, for many of my friends, and for me, Christian faith is indeed about more than a belief in Jesus as the redeemer, important as that might be. It is also about a way of life that extends compassion and respect, that cares less about dogma and more about kindness.

Mr. Obama espoused a theology that sees in all others a person beloved by God, and so can do no less than love them too, a theology that suggests (as the author of 1 John put it) that we must love, not only in word or speech, but in truth and action.

Other Christian traditions reach different theological truths and actions; my Baylor colleague Francis Beckwith, for example, offers a thoughtful Catholic defense of traditional marriage and differs with the President. Mr. Obama himself said that many Christians will disagree with his conclusion.

Obviously faithful people have reached different conclusions about this and other issues related to human sexuality, religious authority, the makeup of the family, and the Good Society. Always have. Maybe always will. But in the final analysis, although there is no consensus, I don't think the President is wrong in his theological reasoning.

And even if he—and I—should somehow turn out to be, I'd always prefer to err on the side of love. 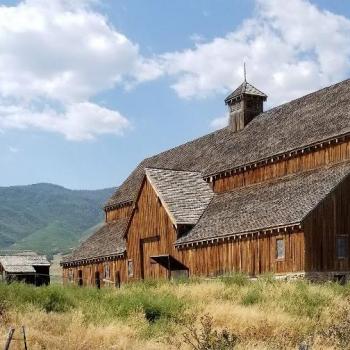 A Proposed Response to the Flood of Immigrants
Roger E. Olson
3

Someone Said Again to LeBron James: "Shut Up and Dribble!"
Kermit Zarley
Get Patheos Newsletters
Get the latest from Patheos by signing up for our newsletters. Try our 3 most popular, or select from our huge collection of unique and thought-provoking newsletters.
From time to time you will also receive Special Offers from our partners that help us make this content free for you. You can opt out of these offers at any time.
see our full list of newsletters
Editor's picks See all columnists