Paul Simon is five feet and one inch tall. I read this recently and it solidified something I've been feeling forever: Paul Simon and I have some things in common.

But it's not just our height. Some musicians just speak to you. They write these songs that you feel must have started in your own head before making their way through the songwriter and onto a record. Everybody feels that about some artist at one time or another, but I've always felt it, all the time, about every one of Paul Simon's one billion songs.

I've never been divorced, let alone from Carrie Fisher, but if "Hearts and Bones" isn't about me, then I don't know what it's about. Speaking of which, no one actually knows what "You Can Call Me Al" is about, but I know it's about me. In "Train in the Distance," when he sings, "Everybody loves the sound of a train in the distance, everybody thinks its true," I really do think it's true. Whatever it is.

The thing about Paul Simon's songwriting, a thing that he himself has expressed recently, is that you don't ever really know exactly what he's on about, but you know he's on to something. His latest album, "So Beautiful or So What" is all about God. I mean, it's right there in every song, and yet it took reading a write up by Cathleen Falsani of Sojourners in order for Simon to realize it. He was so amazed by her discovery that he called her. Paul Simon. Called her. To talk about his songs.

Falsani describes Simon, in an interview on Religion & Ethics NewsWeekly, as a "God chronicler by accident." This is true. And this is what is missing from American religion. We're all so self-assured of the fact that we believe in God, or know God, or that God speaks through us. We are all so certain of something that is beautiful and enduring precisely because it does not lend itself to certainty.

Flannery O'Connor was a great Catholic writer because her writing celebrated the mystery that comes with writing about God. This is why we don't put her in the camp of "Christian authors." Christian authors, for the most part, in fact most Christian artists, don't celebrate the mystery of God. They don't revel in the uncertainty that literally defines faith. They make bold claims and feign intimate realizations. They talk like they know what the hell they're talking about.

But they don't. No one does. And it has always been this way. Moses didn't write like he knew what he's talking about. He even had to ask God his name. David, in the Psalms, lives in the questions he has about God. Job too. The four Gospels can't even get the story straight; certainty was never their aim. We read Paul like he's certain, but if you read closely he shared in the mystery too.

And Jesus. The international man of mystery. Nobody ever knew what Jesus was really talking about. Destroy the temple and rebuild it in three days? Wait, like, the real temple right over there?

Or, whoever wishes to save his life must lose it?

The first shall be last?

Turn the other cheek?

These are the days of miracles and wonders?

Okay, that last one was Paul Simon. But that's the point. We need to return to mystery and get back to the questions. We need to stop pretending we have it all figured out. I need to stop writing like I know what we need.

But it's so deeply ingrained. Paul Simon and I have a lot of things in common, height included, but he's a much better chronicler of God than I'll ever be. 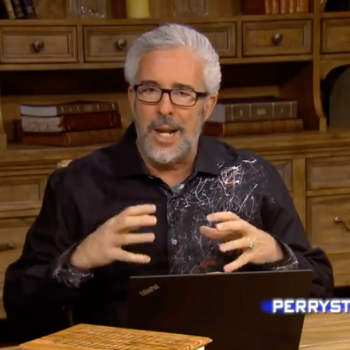 Pastor: Biden is Hebrew for "Alas, Judgment"! (Rabbi: Not Even Close.)
Beth Stoneburner
Get Patheos Newsletters
Get the latest from Patheos by signing up for our newsletters. Try our 3 most popular, or select from our huge collection of unique and thought-provoking newsletters.
From time to time you will also receive Special Offers from our partners that help us make this content free for you. You can opt out of these offers at any time.
see our full list of newsletters
Editor's picks See all columnists