Smile, Though Your Heart Is Aching: Reflections on Philippians 1:21-30

Paul wrote the letter to the Philippians around 50-60 A.D. He had visited the city a few years before in his second missionary journey and founded a church there whose members he regarded with "special affection and deep longing." This letter is a response to their concerns for his imprisonment in Rome and their prayers for his release and gifts to supply his needs.

Paul remains surprisingly joyful despite his surroundings and his uncertainty about his fate.

In this passage from Philippians, Paul is offering a sincere, non-sarcastic thank you to God. For what? For the privilege, not only of believing in Christ, but of suffering for him as well. He is thanking God for the privilege of being in prison. Most of us wouldn't view being imprisoned, shipwrecked, and beaten as a privilege. Most of us don't view the sacrifices we make to put others ahead of ourselves and to make their lives better a pure privilege. Oh, on our best days we do, but in between we do some complaining. I have a friend who says "I can handle almost anything as long as I can whine about it." But Paul isn't whining here in prison. He is smiling and giving thanks. He is even taking it a step further. He is boasting. The prospect of participating in a boast fest with the Philippians motivates Paul to keep the faith even in prison.

"I know that I will remain and continue with all of you for your progress and joy in faith, so that I may share abundantly in your boasting in Christ Jesus when I come to you again" (1:25-26).

If I were Paul I might be saying to God "Thanks a lot!" in that sarcastic mode, with a grimace on my face. The sincere, smiling version would have to wait until I was released and back in the fellowship hall having cookies and coffee after church with the Philippians. Often we wait for the right location to praise God, the auspicious circumstances. We want to serve God and use our abilities to help others, but we prefer that it be under convenient conditions.

Paul is transparent here. He admits that he would personally prefer death to his current privations.

"If I am to live in the flesh, that means fruitful labor for me; and I do not know which I prefer. I am hard pressed between the two. My desire is to depart and be with Christ, for that is far better; but to remain in the flesh is more necessary for you" (1:22-24).

But for Paul, the old real estate dictum, "Location is everything," doesn't apply. When it comes to selling houses and the success of restaurants, location is almost everything. But it makes little difference to Paul. He is able to claim joy wherever he is. Christ will be exalted in his body whether he lives or dies (1:20).

And so, while he admits that he would prefer to die and be with Christ, he realizes that continuing and laboring for the Philippians, even in prison, is better for them. The theme of service of Christ as foremost, and location as secondary, comes through loud and clear. He is determined that Christ will be exalted in his body, whether by life or by death. Paul can smile and say thank you to God in prison because he has learned to set and reset his focus on the presence of Christ and his mission as Christ's servant.

Charlie Chaplin wrote the music for the song "Smile" for his movie Modern Times in 1936. It was originally written in D minor. Much later, in 1954 John Turner and Geoffrey Parsons changed it to a major key, wrote lyrics, and gave it the title "Smile." The lyrics, drawn from the original movie's lines and themes, has the singer assuring the listener to cheer up and that there is always a bright tomorrow just as long as they smile. It's been sung by Judy Garland, Michael Jackson, and Nat King Cole, to name a few. Most recently at the 2014 Emmys, just before Billy Crystal's touching tribute to comedian Robin Williams, Sarah Bareilles sang a poignant version of the song as images of television personalities who had died in past twelve months flashed on the screen.

Smile though your heart is aching
Smile even though it's breaking
When there are clouds in the sky, you'll get by
If you smile through your fear and sorrow
Smile and maybe tomorrow
You'll see the sun come shining through for you

Light up your face with gladness
Hide every trace of sadness
Although a tear may be ever so near
That's the time you must keep on trying
Smile, what's the use of crying?
You'll find that life is still worthwhile
If you just smile

Evangelist: My Critics, With Their "Big Educations," Are in Big Trouble with...
Beth Stoneburner
2

The Thrill of Mary the Godbearer
Anthony D Baker
3 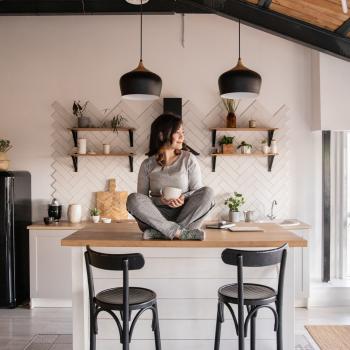