Can We Talk About Abortion?

Last week I wrote an essay here at Patheos on the legislative fight in Texas over women's health and women's rights. Lots of people read it and cross-posted it. Many people wrote comments on it here or on social media. And while the exchanges about that piece were often confrontational, they were a little less heated than others I've observed or heard about, both here in Texas and around the country. One reader, Josh Justice, actually commented that he was "impressed with the particularly patient, thoughtful, and classy replies" in the comments section. "Never did I imagine a comment section on such a contentious issue to contain examples of loving thy enemy."

I was happier than I can express to read Josh's comment and recognize the truth of it. One of the most pressing needs of our time is to begin talking to each other with more respect and kindness about the contentious issues of the day.

In the final chapter of my book Faithful Citizenship, I used abortion as an entry into discussing some ways of talking past the current animosity and disagreement, ways that might be animated by our faith instead of by our partisan identities. It was sparked by a beautiful photograph of two people who might have been enemies:

I find my own feelings crystallized by a photo that ran in the New York Times of the national March for Life rally in Washington, which took place in January of 2012. It shows two lovely young women, both of them bundled against the cold. One holds a sign that reads: "Keep Abortion Legal." The other carries a sign saying, "I Am the Pro-Life Generation." Both look like earnest and good people. Both hold their positions passionately, and, I'm sure, for reasons that make sense to them. (131)

I was moved by that picture—and encouraged by the ability of those young women to hold their beliefs and their signs—and to stand side by side. After witnessing the dialogue last week over abortion, I wanted to return to the subject of considering how we might talk to each other with respect and in Christian love—even when we completely disagree with each other.

Can We Agree That We Don't Totally Disagree?

To start with, although each side of the abortion issue tends to throw out some appalling possibilities and treat them as the other's actual position (partial-birth abortions from pro-lifers, denying abortions in the case of rape from pro-choicers), we actually agree on much, much more than you would think. I don't know any supporter of choice who thinks partial-birth abortions are a good thing. And I have encountered a number of pro-lifers who believe that abortion should remain a legal option in cases of rape and to preserve the health of the mother. According to the most recent Gallup polling, for every person who believes all abortions should be legal—or none should be—twice as many agree that abortion should be available in certain circumstances. There seems to be a substantial bell curve where we meet in the middle.

Our churches and religious teachings reveal our primary agreement. Despite the stereotype of complete Christian opposition to abortion, most churches agree that it should remain legal, at least in some cases. The Pew Forum on Religion and Public Life surveyed Christian denominations and non-Christian religions for their beliefs on abortion and found virtual agreement. Almost every denomination condemns abortion as a method of birth control (the Unitarian and UCC churches make the most liberal allowances here toward choice); almost every denomination accepts that abortion should be available to preserve the health of the mother or in the case of rape or incest (the Southern Baptist Convention has perhaps the most restrictive view, limiting abortion to "those very rare cases where the life of the mother is clearly in danger").

But what this tells us again, is that there is wide agreement among people of faith that ought to prevent our thinking of "the opposition" as unchristian (Unbuddhist? Unhindu?). We can hold different views on the morality of abortion and all still be followers of Christ (Buddha? Ganesha?).

The truth is, we do agree more than we disagree. And I wish we could recognize that. 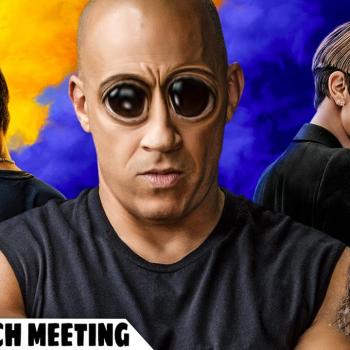 Welcome back to The Movies: June 2021
Mark Wilson
4

The Most Extraordinary and Implausible Inventions Ever Woven out of Gospel...
James McGrath
Get Patheos Newsletters
Get the latest from Patheos by signing up for our newsletters. Try our 3 most popular, or select from our huge collection of unique and thought-provoking newsletters.
From time to time you will also receive Special Offers from our partners that help us make this content free for you. You can opt out of these offers at any time.
see our full list of newsletters
Editor's picks See all columnists