Several things came together in my mind this week. One of them was concern about a presentation made to elementary-school children in Oakland, California, in which a man explained that there are more than two "genders," apparently meaning that a number of human beings are something other than "male" or "female." Rebecca Hamilton, my colleague at the Catholic portal, brought the news clip about this to my attention.

The putative purpose of the "gender diversity" training for small children is to discourage bullying. But the training in the video clip isn't about that. It's about indoctrinating children with a particular viewpoint, one that their parents and society don't necessarily share.

Teaching children not to bully is best accomplished by teaching and demonstrating that they shouldn't bully, period—on principle—and that it doesn't matter whether they like the victim or what he does. Not bullying is a lifestyle lived for its own sake. If we had to understand or approve of everyone around us in order to refrain from being cruel, our lives would consist of very little other than treating people badly.

Meanwhile, the speech in the video is an impressionistic mishmash, confusing gender—the social construct—with the reality of anatomical sex characteristics, and suggesting that the anatomy of two non-mammalian species is a guide to the forms in which humans come. Adults recognize this for what it is—propaganda—but children are less prepared to discern that they're being given a mixture of tendentious half-truths and false analogies.

A useful lesson to draw from this situation is that this is how government-sponsored entities tend to behave. Schools are not parents, and they are regulated by lots of contentious and even conflicting political guidance. Fathers and mothers may teach their children to obey the Golden Rule out of love and obedience, but public schools, as operated today, are incapable of doing that. They are government entities; they can punish or reward behavior—to a limited extent—and decide to favor particular narratives in the classroom. Neither of these approaches has proved very effective at restraining or eliminating the bullying urge.

As bullying becomes more widespread, the need to discourage it opens the door to special-interest indoctrination for the children. This too is a characteristic of government entities: every enterprise or policy we turn over to government will eventually be managed—for their own purposes—by special interests. This is as true of bullying-deterrence syllabi as it is of agricultural subsidies.

Is it wise to put government in this position over us? Consider another pair of instances in Britain, which I wrote about last week. In one case, a couple who had been successful foster parents for a number of years were denied further opportunities to foster children because they couldn't agree to endorse homosexuality to children under the age of ten. The couple challenged this decision (made by their city council) in British court. The High Court upheld the city council in 2011, ruling that "a local authority can require positive attitudes to be demonstrated towards homosexuality."

Nevertheless, an arm of the same British government—the National Health Service's agency in northeast London—recently bought advertising time, with the British taxpayer's pound, on a channel that features radical Islamist clerics, one of whom advocates death for homosexuals—trenchantly and often. (The others advocate, among other things, abuse of Jews.)

These things, too, are inevitable, if government is given a charter to adjudicate all of the people's moral disputes, and pick "winners" based on narrow, single-issue criteria. Eventually, the people will be treated unequally—foolishly and inconsistently—by a law so intricate and multifarious.

A third interesting data point intersects with these more recently reported events. In a GQ interview published in November, author Michael Hainey asked Senator Marco Rubio (R-FL), out of the blue, how old Rubio thinks the earth is.

There's no wrong answer to this question, since none of us knows how old the earth is. There are only answers that seem more or less probable to us. The fact that this question is a political litmus test is a testament to the incorrigible foolishness of mankind. There is, quite literally, nothing the U.S. government can do about the age of the earth. Making proclamations about it, or laws based on assumptions about it, would be even sillier than the pope dividing the earth between Portugal and Spain in 1494. 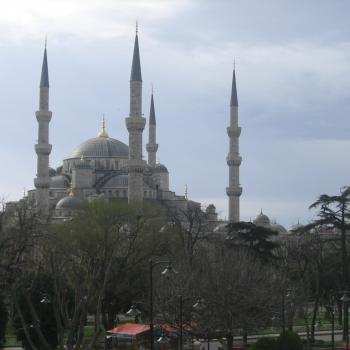 Are these the &#8220;last days&#8221;? Why evangelicals are losing the...
Alyxander Folmer
Get Patheos Newsletters
Get the latest from Patheos by signing up for our newsletters. Try our 3 most popular, or select from our huge collection of unique and thought-provoking newsletters.
From time to time you will also receive Special Offers from our partners that help us make this content free for you. You can opt out of these offers at any time.
see our full list of newsletters
Editor's picks See all columnists