Art and Spirit in the Church

By Christine Valters Paintner -- June 29, 2009
Image: Miniature of the Annunciation, from the Book of Hours, Paris c. 1410. Wikimedia Commons 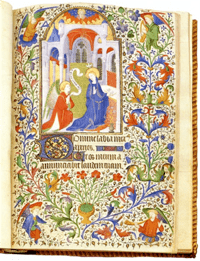 This week in our on-going series on the connection between art and spirituality, we feature Illuminated Manuscripts: Bringing Together Word and Image.

I fell in love with the Cloisters as a child. A branch of the Metropolitan Museum of Art on the north tip of Manhattan, it is constructed as a reproduction of a medieval cloister. Its collection contains art from all over Europe designed to give the visitor an experience of the monastic setting and milieu. I would wander through the cool stone passageways, linger in the lushly planted central courtyards with fountains gushing, and gaze at intricately woven tapestries. It was here that I first fell in love with the aesthetic dimension of monastic tradition long before I understood what that spirituality and way of life really meant.

The art, architecture, and music all made my heart swoon. But it was the illuminated manuscripts that really captured my imagination. I always had a love of books and here were these incredible texts, hand-written in gorgeous calligraphy with elaborate design elements along each page. In the Benedictine monastery, the library is second only to the church in importance. During the long period of the Dark Ages, when little in the way of art and culture was being encouraged or produced, monasteries became the preservers of culture. Here the monks would labor endlessly to copy sacred texts and embellish them with art and decorated letters that helped to illuminate their meaning.

These illuminations are not meant to be mere illustrations, but deeply spiritual meditations on the text itself in a language of color and symbol. The images embedded alongside the words help the reader to enter into the meaning of the sacred texts in new ways and ignite the imagination. The "illumination" refers to the use of gold or silver to create a luminosity and radiance in the images, reflective of its holy purpose. The art invites the reader to an interior pilgrimage where the words and symbols meet a person's own internal experience and longing for God.

Both the Hebrew and Christian sacred scriptures were copied, as were many other texts important to Catholic spiritual tradition. In medieval times, Books of Hours were created, which were small prayer books containing a collection of prayers and psalms to help lay people pray through the Hours of the day and incorporate elements of monastic devotion into their everyday lives. The advent of the printing press changed much of this, making the faster reproduction of texts accessible to a much wider audience. The art of illuminating texts gradually became less valued. Some reproductions of these, such as the Books of Hours (Phaidon Miniature Editions), are available.

Today, the best example of a contemporary illuminated manuscript is the St. John's Bible (http://www.saintjohnsbible.org/), which is a revival of this sacred work for modern times. This has been a multi-year project still in progress and includes the work of several artists and scribes. Using ancient techniques with contemporary images, it enlivens this tradition once again and brings relevant images to modern eyes inviting us again into a deeper relationship with sacred texts through accompanying art.

Practice & Reflection:
Choose an image from an illuminated manuscript (either ancient or modern) and use "Praying with Art -- Visio Divina" to enter into the image in a deeper way.

Become aware in your daily life of the way words and images are used together to amplify each other's meaning. How does art help or hinder your understanding of the deeper meaning of something?

In a world where we receive information primarily through images and sound bytes, what wisdom might these ancient texts have to offer us?

Christine Valters Paintner, Ph.D. is a Benedictine Oblate and the founder and director of Abbey of the Arts, a non-profit ministry integrating contemplative practice with the expressive arts. She teaches at Seattle University's School of Theology and Ministry and also works as a spiritual director, retreat facilitator, writer, and artist. She is the co-author of Lectio Divina: Contemplative Awakening and Awareness from Paulist Press. Visit her website Abbey of the Arts.

Read more Art & Spirit in the Church features:
Liturgy As a Feast for the Senses