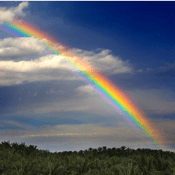 About seven in ten Americans are members of religious communities, and about seven in ten regard climate change as one of the world's more pressing problems. So in a nation unique for both its religiousness and its industriousness, these statistics beg an important question: what happens when these demographics overlap productively? Across the American religious landscape, this question is beginning to be asked, and it's beginning to be answered, too, as religious people of every tradition take up their share of the responsibility for protecting creation.

For example, most Christian denominations, from the Lutherans to the Methodists, the Friends to the Brethren, the Presbyterians to the Episcopalians, have adopted official resolutions advocating better stewardship and protection of the earth. But action has not been limited to national resolution; if denominations have been talking the talk, in many cases they're walking the walk now, too. Indeed, the people in the pews themselves have begun to initiate real change in their congregations and their communities. One of the most significant examples of this groundswell is the Interfaith Power and Light (IP&L) campaign, a network of over 10,000 religious communities in twenty-nine states. IP&L was originally founded as a ministry of the Episcopal Diocese of California, and although mainline Protestant denominations compose the large majority of participating congregations, it has since spread to people of all faiths. Through advocacy, action, and energy-audits of aging church buildings, Interfaith Power and Light aims to mobilize a religious response to global warming through the promotion of renewable energy, energy efficiency, and conservation in congregations.

This match between faith communities and environmental organizers is a natural one. "The threat of global warming is so large that it requires not only a complete transition to clean energy, but also a transition of our thinking and our behavior," says Susan Stephenson, Executive Director of the Interfaith Power and Light campaign. "People learn their first lessons about values from the religious tradition. If we are to initiate a cultural sea change in our society - and begin a new relationship with the earth - we need religion to instill those environmental values." And early signs show that these lessons perhaps are beginning to be learned. Stephenson says that in California alone (where IP&L remains headquartered), religious congregations have prevented over twenty million pounds of greenhouse gas emissions from entering the atmosphere due to the campaign's efforts.

As impressive as these numbers are, it's not just the environment that's benefitting from churches; churches are benefitting too from taking their role in protecting creation seriously. Thomas Nutt-Powell, President and Co-founder of the Massachusetts chapter of IP&L, insists that the environmental crisis presents an important spiritual reminder that people of faith are particularly open to hearing. In taking creation care to heart, Nutt-Powell says, we understand that "nothing is finally ours, we are just stewards of God's creation. We are charged to care for what we have been given." To live within our means - both as individuals and as a culture - is to embrace our own finitude as a gift, which of course is a recurring theme in every spiritual tradition.

Perhaps more important than these spiritual lessons are the moral lessons of justice with which religious traditions have often also been concerned. As Stephenson explains, the United States, the world's wealthiest country, is responsible for the largest portion of global warming pollution. But "the most vulnerable people and countries are least able to adapt to the impacts of climate change, whether drought, disease, or rising seas." So while we Americans live beyond our means but delay the consequences with our vast resources, impoverished people throughout the world (who cause comparatively little damage) have already begun to endure the effects of our waste. "Already, low lying islands in the South Pacific are being evacuated," Stephenson says. It's not only that we're misusing creation; others are being forced to pay for our misdeeds. It's no surprise, then, that "people of faith, who look at this issue through a lens of justice and fairness, often experience a call to action."

Nancy Wiens, a professor of religion and director of the Center for Nature and Christian Spirituality, as well as a Presbyterian minister who has worked with IP&L, sees these two gifts of humility and justice merging in religious practice around nature. According to Wiens, demanding justice while yet embracing finitude means carrying a message full of "hope and patience and kindness, instead of anxiety and judgment and fear. Living as inspired, beloved, and forgiven people enables us to be more peaceful activists for any cause.

Moving out of gratitude helps us notice our connections to all of nature more readily and fully - a key to transforming our relationship with nature to a sustainable one." Indeed, the benefits of environmental action for both churches and creation seem mutual. To be sure, the lessons of stewardship are spiritual ones, but for the moment at least, Stephenson's goals remain robustly concrete. In her perfect world, all religions would embrace environmental stewardship as a core tenet and would display that commitment not just symbolically, but practically too. "We want solar panels and windmills to become features as iconic as steeples on church rooftops."

To learn how to get involved with Interfaith Power and Light in your state, or to start a chapter, please visit http://www.theregenerationproject.org/index.htm.