Christ in the Classroom: A Catholic Education 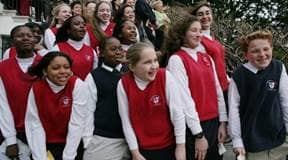 Nuns in black robes and long rosaries rapping the knuckles of misbehaving youth. Rows of white kids in plaid uniforms reciting times tables. Parents giving thanks that their kids never meet a non-Catholic. Is this your image of Catholic schools? If so, think again. Catholic education in the U.S. is racially diverse, generally lay-led, and both Catholic and non-Catholic parents have all kinds of reasons for sending their kids to Catholic schools.

In 2008-09, more than two million kids were enrolled in Catholic primary and secondary schools in the U.S - about 1/3 of all enrollments in private schools. Over 29% of those students are minorities, and almost 43% of the schools are in urban or inner city areas. The people in front of the classroom wear black to look cool rather than as a spiritual discipline: a whopping 96% of teachers are laity. So if it's not the strictness of ruler-wielding nuns inspiring parents to send their kids to Catholic schools, then what is?

Knowing that their kids will get a daily dose of Catholic values along with a good education probably tops the list. That was certainly the motivating factor for Mary Anne Collins, who never thought of sending her three kids anywhere else. "Christ in the classroom," she responds without hesitation when asked what she likes most about her children's education.

But not all kids in Catholic schools come from Catholic families. Just under 15%
come from other faith traditions or none at all. Small class sizes and more individualized attention are a big incentive for some parents looking for an alternative to the public schools in their area. Penelope Pagonis was looking for exactly that when she decided to send her son to a Catholic school. And her favorite part? The non-Catholic Ms. Pagonis really likes the religious dimension, knowing that religion forms a part of her son's everyday experience.

Values education is a hot topic these days, and many parents like the idea of their kids receiving an education within a coherent ethical system, even if they do not share the beliefs that support that system. Plus, Catholic schools typically sport higher test scores than the majority of public schools in their area, and usually have fewer problems with discipline and safety; you won't find metal detectors at Catholic schools. It doesn't hurt they are often cheaper than other private schools (average elementary tuition in 2008-09 was $3159) with some parishes subsidizing part of the tuition for their parishioners and often making financial aid available.

Christine Caron Gebhardt, principal of a Catholic K-8 school in Nashville, sees another incentive for Catholic schools: they are willing to serve the needs of children with differing abilities, including learning disabilities, who are often turned away from other private schools. "These children are the poor and the oppressed of the educational system," she says. She also sees a strong sense of community in Catholic schools, with everything geared toward teaching the children to live a mission of discipleship. Catholic schools traditionally have very strong parent-teacher-administrator relationships, which is one of the best indicators of student success.

Catholic schools have their problems, of course. Dr. Caron Gebhardt notes that adequate wages for teachers need to be addressed in Catholic schools, where salaries are usually lower - and at times just over half - of what public school teachers in the same area make. Non-Catholic students and their parents can feel a bit like outsiders when so many of the other families attend church together and have forged bonds that cannot be shared by those outside the parish. And financial difficulties in some places are causing Catholic schools to close their doors, especially in rural areas.

All in all, though, the Catholic educational system in the U.S. is doing just fine. Sure, most of the kids still wear uniforms and there are nuns here and there, but the real story is the social diversity and the commitment to providing a quality education to underserved populations. And that no one is allowed to rap knuckles with a ruler.