Reza Aslan is thinking big. Three years after the success of his first book, No God But God, Aslan has become a fixture on the "Colbert Report," "The Daily Show with Jon Stewart," CBS News (where he is a Middle East analyst), and a never-ending lecture circuit. Iranian-born Aslan, who now serves as Assistant Professor of Creative Writing at the University of California, Riverside, has completed his second book, How to Win a Cosmic War: God, Globalization, and the End of the War on Terror, which alleges that the "war on terror" fought by the U.S. against al Qaeda was, in fact, a "cosmic war" which alluded to a battle on a higher plane between oversimplified forces of "good" and "evil" that can never be won. Instead, he argues that we must strip this ideological conflict of its religious connotations and address the actual grievances that, despite their co-opting by jihadists, are genuine grievances that deserve their own resolutions. Aslan spoke with me recently to explain why we're still locked in a never-ending "cosmic war," why jihadists should be called what they are and why he's confident things can change under Barack Obama.

Could you tell us a little bit about this construct of "cosmic war" that you've based your book on, and how this reframes the "war on terror"?

Reza Aslan: A "cosmic war" is a religious war; it's a war in which God is believed to be directly engaged on one side over another. Unlike a "holy war"--which is essentially a real war on Earth between rival religious groups--a "cosmic war" has two aspects to it. There's an earthly aspect to it, but there's also a heavenly aspect to it. It is a war of the imagination in which the participants believe that they are actually acting out on Earth a battle that is really taking place in Heaven between the forces of good and evil. Human beings are only pawns in the hands of God, or perhaps actors in a script written by God.

One of the things that you've done in the furtherance of this theme is to build a case for the parallels to acts of terror on the Muslim side from Christian and Jewish perspectives. You bring up the Zealots, the Crusades and several other modern examples. However, a bystander may look at that and say, "Well, I read and hear about the Muslim acts of extremism, but I don't really hear much of the others."

The argument of the book is that al Qaeda and the larger jihadist network that buttresses these transnational militant movements in the Muslim world are fighting a cosmic war of the imagination. There's no political, economic or social agenda actually fueling this movement, but it's really a war that in their minds is taking place on another plane. The fact of the matter is that this is by no means exclusive solely to Muslim groups. The idea of cosmic warfare actually has its roots in the Hebrew Bible. In the book, I go deep into the Old Testament and talk about the ideas of religion and violence and the way they were developed in Judaism, Christianity and Islam.

You're right, though--the fact is that because of the issues that are taking place in the world right now, most people are only familiar with religious violence insofar as they exist in the Muslim world. But of course, these are ideas and impulses that are just as prevalent among right-wing Jews in Israel and certainly a lot of right-wing evangelicals in the United States. I wanted to make sure that people understood that this was a universal phenomenon.

But the larger issue here is that the problem with the "cosmic war" is that because it is not fought for land or territory or any kind of economic gain, but rather for the purpose of ridding the world of evil, that this is a war that cannot be won. It is a never-ending war.

You and I were both involved in advising the Department of Homeland Security on issues of terminology, one of which was the term "jihadist." One of the things I noticed in the book is that you make no bones about using terms like "Global Jihadism" and referring to these people as jihadist or practicing jihadism. How does that square with the efforts by some Muslims to reclaim the word jihad for something other than meaning a violent expression of political will?

Thank you so much for noticing that. One of the goals of this book is to focus on the actual meaning of jihadism. This is an actual thing, and I know that a lot of Muslims have problems with this term because of the fact that it has within it this term jihad, which of course means a whole host of different things. A lot of Muslims feel uncomfortable with the term jihadist. But the fact of the matter is that this is the proper term to refer to those transnational Muslim groups like al Qaeda for two reasons: first, because that is how they refer to themselves and secondly because jihadist means something very specific. This is a very new phenomenon. I traced it to the year 2000, so we are talking less than a decade old as a social movement, and maybe two decades old as a militant movement altogether.

Those who label themselves jihadist have transformed the concept of jihad, first from a collective duty into an individual duty. In fact, a great Yemeni shaykh refers to jihadist as anyone who believes jihad is an individual duty to fight. If that is your definition of jihad, then you are a jihadist. And more importantly, what they have done with this concept of jihad is that they have, in the words of bin Laden, elevated it to a status of worship. In other words, the reason we call them jihadist and not Muslims is because they have replaced the five pillars of faith upon which Islam rests with just one--jihad, and only jihad. This is almost a new kind of sect, so we should call it exactly what it is.

But more importantly, what I want to do is to reclaim the word jihadist and separate it from another term that is often used in conjunction with it--and often confused with it--and that is the term Islamist. We tend to use Islamist and jihadist as though they mean the same thing, when in fact they mean the exact opposite of each other. Islamism is a political philosophy whose purpose is to create an Islamic state based on an Islamic moral framework--whatever that means, of course. Hamas and Hezbollah, for example, are nationalist groups who practice Islamism.

Jihadism is not just against the very idea of a nation-state, it is totally anti-nationalist. It wants to destroy all nations, all borders, all boundaries and to reconstitute the world under a single global caliphate. These are vastly different movements with absolutely opposite ideologies, and yet one of the major faults of the "war on terror" is that we have lumped all of these various groups together under a single rubric, and essentially responded to it with a single tactic--war. In doing so, we created this undifferentiated enemy and essentially fed into this master-narrative that the "war on terror" is in fact, a war on Islam.

As the "war on terror" unwinds, what role can Muslims play in trying to resolve this tension between the Muslim world and the West, and what role should non-Muslims and governments play?

That's a really good question. When it comes to governments, we have to recognize that even though these jihadist are fighting a war of the imagination, the fact remains that the reasons that fuel the jihadist movement are legitimate grievances, and they have to be addressed. Let's make it very clear: for someone like bin Laden, who brings up issues like the suffering of the Palestinians or U.S. support for Arab dictators, these aren't real grievances for al Qaeda. They are symbolic grievances that they use to rally people to their cause. [But] the grievances themselves are legitimate and have to be addressed as such. What we need to do is compel our governments first to change their rhetoric of the war and strip it of its religious connotations, because all that does is empower the jihadists. But more important, we have to address these grievances that have essentially created this master narrative of oppression and suffering at the hands of a "crusading West."

As for people like you and I--Muslims who live in the United States where we have a voice--we have two duties. The first is to compel our government leaders to have a much more broad-minded foreign policy when it comes to the Muslim world, and stop thinking of the Middle East as just a gas station. Secondly, we are in a situation now in which Islam, as I say in my first book No god but God, is becoming increasingly individualized. You have broad increases in education and widespread access to new ideas and theories, and the Internet allows these theories to spread across the world in ways that would have been unimaginable a decade ago. It is up to those of us who are practicing and preaching a pluralistic, reform-minded and more open ideal of Islam to get our voices out there, to make sure we are part of the debate that is taking place right now throughout the world about the meaning and message of Islam as we go into the 21st century.

Are you hopeful that we are heading in the right direction, that we can marginalize the extremists and get everyone else on the other side?

I'll tell you a story. I was in Istanbul while [President] Obama was there for the Alliance of Civilizations conference, and Prime Minister Erdogan of Turkey said something in the plenary that really just struck me. He said that Obama, to him, was the perfect metaphor for the city of Istanbul, this city that is at once of the East and of the West, that straddles the two continents, that is simultaneously Muslim and yet also deeply Christian.

President Obama, who is the son of a Muslim father from Africa and a Christian mother from Kansas, can speak to both communities in ways that come off as very genuine. In a sense, he is somebody who by himself has managed to bridge this fake divide between the so-called "class of civilizations," between Islam and the West. I think that so far, in his rhetoric and his attitude, he has really begun to change some minds in the Muslim world.

Now granted...he has got a long way to go, and frankly he hasn't done much--I mean, it's mostly been talking. But if this is a war of ideology, words do matter, and so far his words have been right on. I am confident, and I do feel positive that maybe a new narrative can be written about the relationship between the U.S. and the Muslim world. But obviously, it remains to be seen.

Shahed Amanullah is Editor-in-Chief of altmuslim.com, which originally published this interview on May 4, 2009. 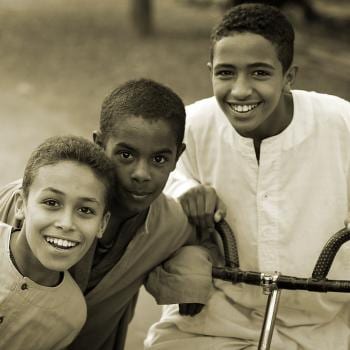 Intra ecclesiam nulla salus (again)
Fred Clark
Get Patheos Newsletters
Get the latest from Patheos by signing up for our newsletters. Try our 3 most popular, or select from our huge collection of unique and thought-provoking newsletters.
From time to time you will also receive Special Offers from our partners that help us make this content free for you. You can opt out of these offers at any time.
see our full list of newsletters
Editor's picks See all columnists