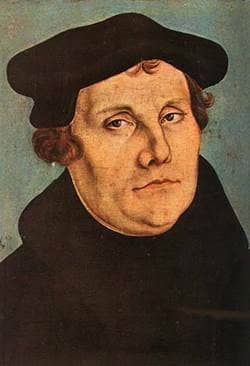 "the-o-lo-gian": one who reflects on God

In this regular column, we'll highlight leading theologians - past and present - who have been influential in shaping the values and beliefs of the Protestant tradition. This week: Martin Luther.

Martin Luther (1483-1546) was an Augustinian Roman Catholic monk who broke from the Roman Catholic Church on theological, liturgical, and political grounds. Luther came from an upwardly mobile family and his father (Hans Luther) sent him to study law at the University of Erfurt. A life-threatening event in his freshman year converted him to monkhood and in July 1505 he joined the Augustinian Cloister in Erfurt. He went on to become a doctor of Holy Scripture and served life-long as professor and pastor at Wittenberg. Wittenberg, population 2,500, was capital of the duchy of Saxony in northern Germany.

Luther broke from his Catholic background on the Church's use of indulgences, a practice that involved the Church's forgiveness of sins as a reward. Opposition to this "mathematics of salvation" underlies everything Luther said and did. Inspired by St. Paul's letter to the Romans, Luther believed that the forgiveness of sins is the result of God's gift and not human efforts (also called "justification by faith").

Insistence on God's unmerited response to human sin in Christ led him to affirm Christocentric theology, to reject indulgences, the necessary mediation of the church between God and believers, and "good" works, and to deemphasize believer's baptism and ritual obligations. Luther, however, also held that a Christian life was a life of commitment to serve others, communal living, social responsibility, and Christian practices. He insisted theologically on a Christian's freedom from sin, obligations, and the rule of Rome but also preached acceptance of local governments/German princes, modified old church practices, and gradual reformation. The role of German princes in protecting him and supporting his refutation of Catholicism cannot be underestimated. The Luther of the "Ninety-Five Theses" of 31 October, 1517, most probably did not desire the Catholic-Protestant divide that was soon to follow. However, the later Luther of tracts like "The Freedom of a Christian (1520) and "The Babylonian Captivity of the Church" (1520) certainly had reached a breaking point with the papacy and Catholic theology on salvation, grace, sacraments, Scriptural use, and liturgy.