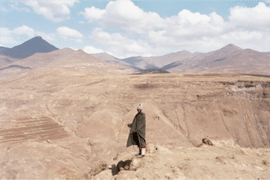 In her book Writing Down the Bones, Natalie Goldberg tells that when Zen teacher Shunryu Suzuki was on his deathbed, he said to a visiting friend, "I don't want to die." As Goldberg notes, we tend to expect more inspiring last words from our dying religious figures, especially from our Zen masters. Something about oneness or freedom or contentment or peace, maybe. But Suzuki didn't share anything like that, just the simple, truthful final wish that he might live just a little bit longer.

I could do a lot worse than to imitate a Zen teacher, I suppose. So in the spirit of his confession, although under circumstances somewhat less final, I admit: I do not want to die. Simply put, death frightens me. I'm a working, pastoring Episcopal priest, but my attraction to that profession has more to do with my sense of God's presence among the living than among the dead, and in all candor I find the orthodox conception of life after death in the Christian tradition neither very compelling nor of much comfort.

Of course, like anyone else of a certain age, I've encountered death several times: at the bedsides of my grandparents in nursing homes; at the graveside of my cousin after his suicide; next to an eighteen-year-old with a gunshot wound to the head as a hospital chaplain; with premature infants in the neo-natal unit of that same hospital; with friends and elders dying of cancer or strokes or heart disease. And although I've probably spent more hours than the average thirty-two year old at the bedsides of dying people, I confess these haven't always been my most pastoral moments. Typically in these times I'm more concerned with the lives that will continue in the future than with the death taking place in the present. I crowd my mind with worries over what will happen in the next moment, the next hour, the next day, the next life. There are moments of care or consolation, too, of course, moments that transcend my worries and expectations, but I wish I could say these transcendent moments were more frequent and more sustained than they actually ever are.

So I don't really know what a good death is, or what makes one death better than any another. We'll all find out one day I guess. But having pastored so distractedly at so many bedsides, I think I can perhaps speak to what really living with another's death might look like, because I think if anything is good about death, it's the moments of tenderness and care we living might sometimes share with those who go before us to die.

The Kingdom of Lesotho is a small, landlocked nation in southern Africa about the size of Iowa. It is desperately poor, one of the poorest nations in the poorest continent. It's no coincidence, then, that Lesotho has the third highest rate of HIV infection in the world. Because of the dire circumstances of disease and poverty in Lesotho, five years ago some friends of mine and I founded the Touching Tiny Lives Foundation, an American non-profit that raises money for a locally operated safehome and outreach center for HIV-impacted orphans and their adopted families.

I visited Lesotho a few years ago to see about the work we were helping to fund. Overall the trip was surprisingly uneventful. Although the poverty of rural Africa exceeded any expectation I might have had; although being a single Asian among Africans enlightened me to a new understanding of minority; although poor infrastructure made clean water and power occasional luxuries rather than predictable necessities, in fact I wasn't very unsettled. Most of the children I encountered were relatively healthy and safe because they had been under our care for several weeks. Even the infected babies were well-fed and well-cared for and receiving antiretroviral medication, and so had relatively promising futures.

The day before I was preparing to leave, however, a woman arrived after walking several hours from a distant village, hoping we would take her niece into our care. Her sister, the child's mother, had died of AIDS after giving birth, and they had been caring for the infant girl for three weeks since that time. They had no goats or sheep, no money for milk, and no one who could nurse the child, and so they had been feeding the baby all they had to give: a thin, corn gruel she had no remote chance of digesting. The infant had lost weight rapidly and, malnourished, had also contracted a severe respiratory infection. Her name was Amohelang.

The director of the safe home, a remarkable woman named Nthabeleng, told the woman we would do all we could, then came to get my help. When we arrived in the nursery, Nthabeleng got busy undressing Amohelang for a bath while I stood back. When the child was naked, I peered over Nthabeleng's shoulder at the child and, aghast, I whimpered, "Oh my God." Nthabeleng looked at me with tender confusion; for her the sight of skeletal, dying child was tragically commonplace, but for me the sight of Amohelang's wasting body withered my breath. The child was three weeks old and weighed less than three pounds; her skin sagged in loose folds around her clearly visible ribs and thigh bones. Her chest hitched and halted and she wheezed through infection for breath. At once I lost all sense of the room and the world around me.