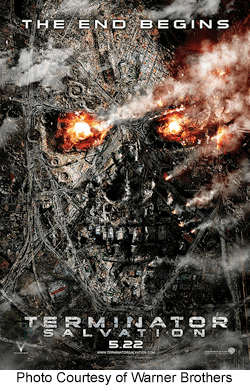 Human beings have an in-born yearning to know the answer to the question "why am I here?" We all want to know if we're here for a reason, if we matter, if we are doing the things we are supposed to be doing. And as technology continues marching forward at an ever-increasing tempo, we add to that: "what does it even mean to be ‘human'?"

And where do we explore these existential questions? In church? Well, the data suggests we might be spending more time exploring them in a movie theatre. (See the "Snapshots" tab for some provocative views of that) Hollywood has always helped us explore the answers to the "big questions" of existence, and that seems to be more true now than ever before.

The premier of "Terminator: Salvation" is but the leading edge of a fresh wave of apocalyptic fare heading our way over the next several months. A film adaptation of The Road -- Cormac McCarthy's starkly beautiful, Pulitzer-winning novel set in a grimly imagined near-future--premiers in October. And the end-of-the-world special-effects extravaganza "2012," originally slated for release this summer, will instead have us heading for the hills around Thanksgiving.

On the small screen, Ron Moore's Caprica, set half a century before the nuclear holocaust that sent a ragtag fleet of human (and human-ish) refugees scurrying Earthward in Battlestar Galactica, has begun to explore the narcissism and hubris that lie just beneath the surface of our technological aspirations.

And in June, enraptured (or soon-to-be-Raptured) fans of Tim LaHaye's Left Behind series -- more than a dozen books, and counting -- can meet the author himself at the Global Warning Prophecy Conference at Grace Gospel Church near Boston.

So what gives? Why are we Americans such ravenous consumers of these endlessly recycled tales of the End Times?

The short answer: it all goes back to the Puritans.

In "Apocalypse," the brilliant Frontline series that ran on PBS at the turn of the millennium, Paul Boyer, now an emeritus professor of history at the University of Wisconsin, observed that the Puritans didn't simply see themselves as the inheritors of the blessings of the ancient Israelites -- the source of the "City Upon a Hill" thread that continues to weave its way into our American political narrative. They also interpreted the religious and political tumult of their times through the lens of the biblical texts that guided their faith.

"[The Puritans] read the prophecies in terms of the political crisis of the mid-17th century in England," Boyer said, "and viewed not only the Roman Church but the leaders of the Church of England in apocalyptic terms, as a kind of demonic force that had perverted the true faith, and that it was their mission as Puritans to literally purify the Church of evil and to bring about the true kingdom of Christ."

Just as the Puritan longing for freedom from state control of their religious practice evolved -- with a dash of DNA from the Enlightenment genome -- into the "free exercise" and "establishment" clauses of our secular Constitution, their hankering for the Second Coming has spawned a distinctly American apocalyptic fetish that expresses itself in ways both religious and not-so-religious.

Which brings us back to "Terminator: Salvation." The latest installment in a multibillion dollar entertainment franchise that includes television, gaming and merchandizing products as well as three previous feature films, "Salvation" (as the name suggests) is also a tweak to our collective jonesing for storylines of redemptive violence. McG, the film's director, acknowledges the nod to the prophet from Nazareth and the texts that predict his FX-heavy return -- as if his auspiciously initialed hero (John Connor) weren't enough of a giveaway.