Meditation: What Are You Building?

By Galen C. Dalrymple -- June 30, 2009
Photo: credited to szalik through the Creative Commons 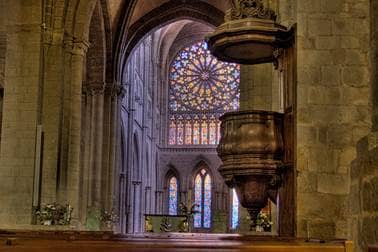 I once attended a conference called "Live a Legacy" where the speaker, Dr. John Tolson, addressed the issue of Christians in the secular workplace. He shared an illustration of two people laying bricks. When they were asked what they were doing, their very different answers showed how their hearts were in very different places.

The second answered, his eyes full: "I'm building a cathedral!"

If you are a man or woman who works full-time, you will spend roughly 150,000 hours of your life working. This represents, depending on how long you live, 45-70% of your waking hours. That's a lot when you stop and think about it. Since it represents the bulk of your conscious time, it is the single greatest opportunity you have to do God's work -- no matter what your occupation. Seen through the eyes of faith, your work is restoring the creation and building the kingdom of God.

Dr. Tolson also said: "Christianity won't work in the workplace unless it first works in the worker." Is your Christianity working in you? The New Testament says some amazing things about what is "at work" in us: God's power (Eph. 3:20), life itself (2 Cor. 4:12), and the word of God (1 Thess. 2:13). If you want your workplace to be more "Christian," then you need to be more Christian in the workplace by letting God's power, life, and word be "at work" in and through you.

Your work is vitally important to God for several reasons. First: it is one of His gifts to you and He wants you to enjoy it. Second: your co-workers are important to Him and He wants to use you to bless them and touch them with the wonder of His love. Third: much of who you are and will become in this world is based on what you do for a living. This world is not disconnected from the next; the choices we make, the deeds we do in this world, and the perspectives we have as we do them, shape us and direct us--toward God or away.

Are you laying bricks? Or are you building cathedrals? You must make a choice. You may not be free to change your job, but you're always free to change your perspective. It's your life, but it's meant for God, so do your work for the glory of His name!

Before becoming a pastor, Galen worked for many years for a computer company in the San Francisco Bay Area. Now he is pastor of Vineyard Hills Christian Church, a non-denominational Evangelical church in the wine country of California. His daily meditations, Daybreaks, are received by readers all over the country, and several will be featured during the Faith@Work Consultation.