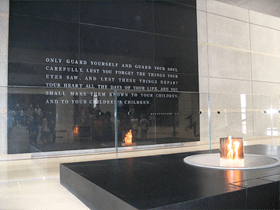 When I first heard of Wednesday's shooting at the Holocaust Museum my immediate thought was, "Mrs. Siderowitz."

Growing up in Sydney, Australia in the 1970 and 80s, each year on Holocaust Memorial Day my Jewish day school would hold a remembrance ceremony. School policy dictated that even five-year-old first-graders attended those assemblies. My earliest, memory though, is as an eight-year-old.

Along with the de rigueur reading from the Diary of Anne Frank and the lighting of six candles for the six million who perished in the Holocaust, every year, without fail, the high school Yiddish teacher, Aliza Siderowitz, would clamber onto the same rickety assembly stage and tell her story in her heavy European accent. And every year, without fail, every single student held his or her breath.

Whenever I recall Mrs. Siderowitz' story it makes my palms sweat, my head pound and my stomach turn. The story of how, as a teenager she trudged through a death march in bitter snow at gunpoint to an open pit; how she was forced to strip naked and was then shot alongside hundreds of others; how she fell into that pit thinking she was dead and felt the weight of other dead bodies falling on top of her; how once she realized she was still alive her greatest fear was that she would be suffocated under all those bodies; how she waited hours and hours until she was sure the Nazis had left and then clambered out of that pit naked, freezing and terrified and ran through the woods never looking back until she came across a non-Jewish family who took her in and saved her life.

Her story is one that is etched in my brain to this day. Her stories and those like hers are the ones we listen to to ensure we "never forget." Aliza Siderowitz' story will never be forgotten by me or by the scores of students who passed through the doors of Moriah College in the three decades that she taught there.

And in the wake of Wednesday's attack, I wonder if James Wenneker von Brunn would have wrapped himself in his Holocaust-denying cloak and his white supremacist views if he'd had to listen to Holocaust survivors' stories when he was younger. I wonder, as he holed himself up in his home, filled with rage as he planned this attack, if he knew of the recent ordination of the first African-American female rabbi. I wonder how he continued to live in a changing world and come to terms with the fact that an African-American Christian with a Muslim background who has an African-American rabbi as a brother-in-law is now the president of his country?

White supremacist. African-American security guard. Jewish museum. The irony is inescapable. There are those who argue that this was a one-off attack -- the lunatic actions of one crazed man whose prior activities were well known. There are still others within my community who feel this is just the beginning of more attacks on our people; citing two other recent attacks on Jews.

I pray it's not the latter, and the James von Brunns of the world cannot escape the fact that we are living in a changing world. For every von Brunn there are thousands of people embracing a future that creates an environment that produces an African- American president who can speak openly to the Muslim world. For every von Brunn there are scores of people of different faiths coming together to engage in dialogue, in an effort to understand not just our differences, but also our similarities. At Patheos, we are committed to engaging in open dialogue and debate, in bringing together people of all faiths and creeds so that we can live in a world where it's possible to discuss our respective views in an open space committed to tolerance and understanding.

The Mrs. Siderowitz's of the world won't be around much longer. But I know in my heart that those of us raised listening to her stories, and those raised listening to the stories of Stephen Tyrone Johns' ancestors share a common bond. We will continue to work together to create a better world for all of God's children and the James von Brunns of the world should know that.

As the Holocaust Museum continues to stand as a reminder to "never forget," so too must we never forget the life of Stephen Tyrone Johns. And as we say in our religion, may his memory be for a blessing.

This article first appeared in the Washington Post's On Faith Column on June 12, 2009.

Post Script: I wrote about Mrs. Siderowitz in an editoral in The Jerusalem Post several years ago when I was living and working in Israel. At that time I noted that I wasn't even sure that she was still alive. As an eight-year-old she looked about 60 to me. But she also looked about 60 when I was 18-years-old. I later found out that someone in Australia read that editorial and they sent me an email informing me that Aliza Siderowitz was indeed still alive and well and living in Sydney. Sadly, following the publication of this piece in The Washington Post on June 12, I received an email that Mrs. Siderowitz recently passed away. May her memory be for a blessing.