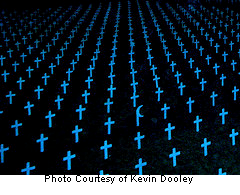 The sorrowful song of bugles will echo across the country this coming Monday in remembrance of fallen soldiers and their living comrades. Memorial Day's annual angst will be relived by millions of Americans who have lost a loved one or have a sense of the sadness that overcomes one when a flag-draped coffin is lowered into the earth preserving the remains of a solider - male or female - who fell protecting his or her country.

American Muslims will be among the mourners. Although only 1 in 400 soldiers is a Muslim, there are multitudes of Arabic, Urdu, Persian and other names engraved on headstones in military cemeteries across the U.S.

One such Muslim soldier is Kareem Rashad Sultan Khan, the 20-year-old corporal who died decorated in the military honors of a Bronze Star and Purple Heart.

Although Corp. Khan's name is among hundreds of other Muslim soldiers who are buried in Arlington National Cemetery, his took on greater meaning in October of last year, when it was carefully sounded out by former Secretary of State Colin Powell on NBC's Meet the Press.


Sec. Powell was on the Sunday politics show to endorse a presidential candidate. He ended up endorsing now-President Barack Hussin Obama, but before he did, he mentioned a photo he saw in New Yorker magazine that showed a mother resting her head on the gravestone of her fallen son in Arlington National Cemetery. The gravestone was that of Corp. Khan and included his engraved name, military awards and at the top was the Muslim symbol of the crescent and the star.

Sec. Powell's defense of American Muslims coincided with his endorsement of Barack Obama and his earlier viewing of the photo of Corp. Khan's grave. He says very clearly, "I feel strongly about this particular point because of a picture I saw in a magazine."

It is difficult to overstate how important the photo of Corp. Khan's grave and grieving mother were to Sec. Powell's passion about the rightful place of American Muslims in America's social fabric. And the photo was not a Muslim doctor saving a life or a Muslim woman shaking the hand of another person to seal the deal of a major trade agreement. It was a grieving mother and her son's headstone that stirred Sec. Powell to make such a rousing and clear defense of not only American Muslims, but also their aspirations to attain the highest office in the country.

This is an important point that must be explored.

The military plays an important part in any country's psyche. It is tied to imagination and possibility - reactive security and proactive domination - a mixture of protecting what already exists with an aggressive movement of expanding the possibilities of what can be. It is an extension of the existential - the key to national welfare and existence.

This is increasingly true for a post-9/11 America, an America that is constantly concerned with domestic security, a security for many Americans that is not limited to national border protection, but extends to the fighting that occurs in foreign theatres. Foreign invasions such as Afghanistan and Iraq are seen as necessary parts of ensuring domestic security so that the terrorists will be stopped on their soil before they reach America's; as said our former leaders, the same ones who warned of a smoking gun in the form of a mushroom cloud that would, we were warned with certainty, originate in Iraq.

With Maslow's Hierarchy of needs, we know that security is a paramount human need that must be met before a person or people can advance to a higher state of existence and engagement with the world around them. The military's ensuring of that need plays an important role in shaping the purpose and meaning of a military and its culture. Because the military provides security, and soldiers die fighting to maintain that security, soldiers die so that individuals and the nation may live. A soldier's death is therefore seen as a noble and deeply profound sacrifice for those in the military and outside who must come to terms with the death. Meaning must be assigned to death in almost all instances because no one wants to leave their earthly existence on a minor note, but with purpose. And in today's modern world of nation states, what higher purpose can there be than the protection of a people and their state?