Not the Face in the Mirror 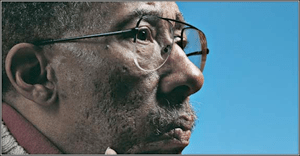 When I first met with my rabbi to begin a course of study towards conversion, one of the books he slipped into my hands was Lovesong by Julius Lester. The son of a black Methodist minister, Lester would come of age in the South before the Civil Rights movement, but he would also begin a long journey from his family's piano (on which he would play Kol Nidrei, the opening service of Yom Kippur) to a Jewish conversion in the early 1980s. I remember reading Lester's journey as I proceeded with my own. Indeed, I have re-read it many times over the course of my walk in the Jewish faith. More than any other, this was the book that shepherded me towards the covenant, and I always felt it was ironic that the story of a black man my father's age would touch me more than those of other white converts.

When we conceived of doing an entire issue focusing on black Jews it seemed obvious that I should seek to include Julius Lester in that conversation. Over the course of a few weeks, I sent along questions and he passed back answers. I realize now that I began the interview focusing on Lester as an overtly black Jew with those two identities balancing against each other. Once again, it was his thoughtful words that helped guide me to a better understanding. I now see him as a man who "encompasses multitudes," not just black or Jewish, but this and much more. Lester refers to individuals as "one syllable in God's infinite vocabulary." It is a lesson that, as one who lived through the Civil Rights movement and a Jewish convert, he is uniquely qualified to teach.

Q: First, I wanted to start (where else) on page 1 of your book, Lovesong. You talk about finding "the name by which God knows you" so that "you will know who you are." You go through "Father, Writer, Teacher" until you finally uncover your Hebrew name, and you present it as a sort of unifying force between your true self and your various identities. I was surprised when you wrote, "I am no longer deceived by the black face which stares at me from the mirror. I am a Jew." I was wondering if you could talk about that deception. It seems like a particularly harsh word.

A: Yes, I was aware when I wrote that sentence that it sounded harsh. I tried to soften it but there was no other way to express it. We generally tend to identify ourselves with what we see in the mirror -- race and gender, principally. But these were determined by the "accident" of sperm integrating with egg. Why then do we put so much value on those aspects of ourselves over which we have no control? I've always been reluctant to say to somebody, "You have beautiful eyes." The person did nothing to acquire such eyes, and yet, people on the receiving end of such a compliment invariably smile, grin, are very pleased, and say thank you. What I do say is, "I like your eyes," and such a comment creates a relationship between me and that person. We live in a society in which incredible value is placed on genetic "gifts." We identify ourselves on the basis of these genetic "gifts." "I'm black. I'm white. I'm Asian." So, the sentence was designed to shock the reader. I would like the reader to look in the mirror and see that his or her identity is not bound to the face that stares back.

One of the comments I have gotten from born Jews, which I never found funny, was "Gee, you don't look Jewish." As if how I look reveals anything about me.

Q: I want to sort of continue with the subject of your social and soul identities. About growing up in the South and facing racism you wrote, "I chose invisibility and walked as if I did not occupy my body... Nothing could mitigate the ontological terror of nonexistence, the unending trauma of being damned in the flesh." I'd be curious to hear how those wounds of your social identity were addressed by the rise of your soul identity as a Jew.