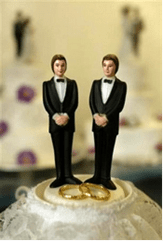 These days it's hard not to run across a news story about same-sex marriage. Whether the headline is about ballot initiatives, an inaugural prayer, state Supreme Court decisions or even what a beauty pageant contestant said--we're all talking about it.

In a recent nationwide poll that we at Patheos commissioned from Opinion Research Corp., we asked respondents to rank a series of "topics that could involve religion" according to which were "most pressing in America today." You probably won't be surprised to learn that same-sex marriage led the list.

So this week we start a two-part series:

As we begin this series, here are some of the questions underlying content on our Public Square and just inside our Gateways: Should the government take an interest in defining marriage? Should that definition allow only for one man and one woman in a legally recognized union? Where do these considerations cross the line that separates church and state, if ever?

And above all, is the outline of this debate as simple as we think? Take a look through the Perspectives (just below the Public Square main tabs) from the six traditions with active Gateway Teams (Catholic, Evangelical, Mainline Protestant,Jewish, Muslim--and from our newest team to come online--Pagan).  You'll see how hard it is to draw neat and tidy boxes around the topic.