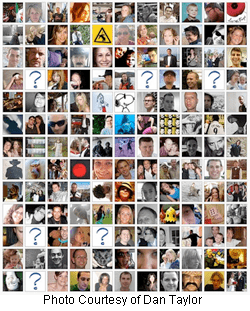 There's an old story, probably not true, about a philosophy student who gave a one-word answer to an essay question during a college exam and got an A. The essay question was "Why?" His entire essay was, "Why not?"

I won't be as silly and reckless with this essay, but I must tell you that when I first heard the subject - Who speaks for us? - my first thought was simply to answer: No one, of course!

This was not always true. Had you asked me that same question while I was growing up in Casablanca in the 1960s, I would have given you two names for "Who speaks for us?" The chief rabbi and the chief macher (big shot), the one who was friends with the king.

But this was before the era of Twitter, Google, and YouTube, before technology turned us into self-worshipping, freedom of choice junkies.

When we enter our moments of leisure, we can now choose from millions of options to entertain, stimulate, inspire, inform, amuse, and even challenge us. Pick your blog or your website. There are a few hundred million.

Today, getting in each other's way by speaking our individual minds, or, in more biblical terms, using the free will that God gave us, is the essential feature of being Jewish. If the head of a Holocaust memorial tries to convince you that your Jewish identity should be wrapped up in a "never again" mantra, and if you don't buy that message, you will get in his way by mocking him on your blog. If the head rabbi of your community gives an impassioned sermon on the importance of coming to synagogue on Shabbat, and you think he's out to lunch, you will respond: "No thanks, chief rabbi. I get why synagogue works for you, it's how you put food on the table, but personally, I get a lot more spiritual elevation by hiking in Temescal Canyon and then listening to Coldplay at the Coffee Bean."

And if the head of your local Federation gives a speech on the importance of "Jewish continuity" and the message bores you, you will tune her out by checking your Blackberry.

Why listen to any of these "leaders"? Who are they? Who hired them? Why should they be my leaders? So-called Jewish leaders can claim to speak for us on anything from Jewish identity to Torah observance to Israel to Tikkun Olam. But if their message doesn't resonate or if they haven't earned my respect, their claim is meaningless.

The fact that we now have the power to spread our own messages instantly to millions has changed the nature of the leadership debate. If someone wants to represent us, lead us, get us to listen and even follow, they will have to earn it one Jew at a time.

Ironically, if you go back far enough, this is very Jewish.

What made Moses a great leader? Not his status or ambition or charisma but his humility and his loyalty. He was humble enough to not want the job in the first place. Even when God asked him, he wasn't sure he should take it. He didn't want to disappoint. And when he had to choose between his boss, God, and his people, whom did he pick? His people. That's why they followed him, and that's why he could speak for them.

Imagine the head of a big Jewish organization doing that. Putting loyalty to the people ahead of loyalty to the money guy who will buy five tables at the next fundraiser.

No one person today, however close they get to emulating Moses, will be able to speak for all of us. But if they show humility and loyalty and the ability to inspire, they might get some of us to follow some of the time. In other words, the ones who will speak for me will be the ones who understand that first and foremost, I speak for me.

David Suissa is the founder and CEO of Suissa and Miller Advertising, a marketing firm that represents clients such as Heinz, McDonalds, and Charles Schwab. Suissa is also the founder, publisher, and editor of OLAM Magazine and Ads4Israel.com. He writes "Live in the Hood," a weekly column in the Los Angeles Jewish Journal, and he lectures regularly around the country and on college campuses on the subjects of spirituality and Israel. He can be reached at dsuissa@olam.org