How Can the U.S. President Speak to Two Audiences at Once? 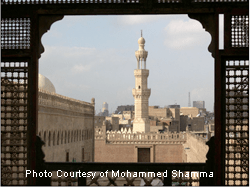 "The anger is real; it is powerful; and to simply wish it away, to condemn it without understanding its roots, only serves to widen the chasm of misunderstanding."

So declared President Barack Obama during his celebrated speech on race in March 2008. He was speaking, of course, about America's history of slavery and segregation. But he might as well have been speaking about the anger felt by millions of Arabs and Muslims - and the tragic legacy of American involvement in the Middle East.

President Barack Obama will give his highly anticipated address to the Muslim world on June 4th. His choice of Egypt as the venue presents risks but also offers the opportunity for a potentially groundbreaking address - one that attempts not only to explain American policy but to re-orient it. This is what Obama was able to do in two of his most impressive speeches, the March 2008 address on race and the June 2006 address on religion in America. In contrast to most political speeches, Obama managed to challenge different audiences - black and white, religious and secular - to face difficult, complex realities, paving the way forward for a reconciliation of seemingly contradictory impulses in American life.

Such skills and rhetorical ability will be sorely needed in Egypt. Already, the selection of Egypt, rather than, say, Indonesia, Morocco, or Turkey, has been interpreted by members of the embattled Egyptian opposition as a tacit endorsement of President Hosni Mubarak's increasingly repressive regime. Mixed in with such concern is a kind of repressed nostalgia for the days of late 2004 and 2005 - the now blurry "Arab spring" - when the Bush administration seemed, for a moment at least, serious about putting pressure on Arab autocrats to open up.

Arab reformers are worried that Obama, in prioritizing the Arab-Israeli conflict and other American strategic interests, will de-prioritize human rights and democracy. They may have reason to be concerned. Obama's decision to come to Cairo was lauded by Egypt's pro-government press, which seemed to interpret the choice as a vote of confidence in the present Egyptian leadership.

The speculation, however, may be premature. What Obama chooses to say - and how he says it - will be much more important than the matter of one location over another. After giving a major interview to al-Arabiya and a major address in Turkey, Obama will be expected to break new ground, going well beyond a message of mutual respect and tolerance. Mutual understanding and dialogue, after all, will not be enough to recast our damaged relationship with the Muslim world.

President Obama has correctly put his finger on torture abuses, the Iraq war, Guantanamo Bay, and the festering Arab-Israeli conflict as sources of anti-Americanism. But before Iraq and Guantanamo, and at the peak of Oslo peace process, the U.S. was still viewed by many in the region with weariness, if not, at times, outright suspicion and hatred.

The sources of grievance are deeper and more pronounced than we like to think. America has been seen as a destructive force and an obstacle to Arab progress, in large part due to our remarkably consistent support of repressive Arab autocrats, over not years but decades. It has been an unfortunate, costly bargain - regimes support our strategic interests in the region. In return, we turn a blind eye to the crushing of domestic opposition. This wager was justified by policymakers as a necessary evil during the Cold War. However, it did not end then, and our economic and military support for some of the region's most egregious actors continues.

What do you think?
Join the discussion on Obama's speech in Cairo.

In short, President Obama, on June 4th, will have two primary audiences, but, then again, America has always had two audiences in the Arab and Muslim world. For too long, we prioritized one over the other, favoring regimes at the expense of publics. Next week, Obama will have the opportunity to shift the balance. To do so, he will need to frankly acknowledge the mistakes of the past, and the role we have played in looking away, when reformers were hoping that we would at least look.

But how does the President speak to two audiences at once? There will be an unavoidable tension. He will obviously need to be respectful of his Egyptian hosts. At the same time, he will need to show the Arab people that American ideals will not be sacrificed at the altar of short-term strategic interests. Just as in Latin America and Eastern Europe, authoritarianism in the Middle East cannot last forever. With this address, President Obama can demonstrate that, even if democracy may not be the only or overarching concern, it is something that America will not forget or ignore as it attempts to improve its troubled relationship with a troubled region.

Shadi Hamid is Director of Research for the Project on Middle East Democracy (POMED) and a Hewlett Fellow at the Center on Democracy, Development, and the Rule of Law (CDDRL) at Stanford University.