The Dialectic of Capital Punishment 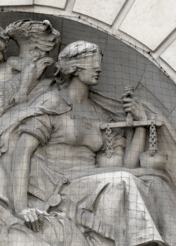 Notwithstanding the call, in the Five Books of Moses, for capital punishment in response to numerous violations of the law, two of the great rabbis of the Mishnaic Era in Judaism, Rabbi Tarfon and the famous Rabbi Akiva, maintained that if they were ever on a court that had to judge a capital offense, they would never execute anyone.

This statement is, actually, not as radical as one may first think. The Talmud, in generic terms, also states that a court that executed once in seven years or, according to another opinion, once in 70 years, was deemed to be destructive, i.e. a "hanging court" (much like a "hanging judge"). One must still wonder, though, if capital punishment should never or rarely be applied, how is one to understand the Bible's call for this punishment?

The biblical statements that certain crimes were, theoretically, punishable by the death penalty were actually not challenged. The rabbis knew though, that in the oral, revelational tradition, which accompanied the text, there were myriad procedural and evidentiary rules that made the carrying out of this penalty next to impossible. For example, according to Jewish Law, only the testimony of two eyewitnesses is acceptable. How often do you think we would be executing anyone if such laws applied in contemporary society? Rabbis Tarfon and Akiva were adding their understanding of the overall lesson of Jewish thought in regard to capital punishment. Certain crimes, indeed, do deserve the death penalty - but, practically, we are never to carry it out.

Jewish Law often distinguishes between the nature of an act and the person who performs this act. An act may be declared to be evil while the one performing the act may not. Declaring that a certain deed deserves a penalty of death informs us of the gravity of an action. Applying a punishment to a person, though, demands a different evaluative process. Declaring a person to be evil and thus deserving death is a much more difficult task. Even within our secular legal system we make a distinction between those who are mentally ill and those who are not. We recognize that one's psychological state may impact one's moral sensitivities and we understand that a verdict of guilty and a decision of evil are not dependent solely on the act. A determination that a person is evil demands an investigation of the psychology of a person. How do we, though, honestly draw the line between a psychological motivation, which mitigates condemning a person, and the motivation of evil itself?

One may conclude that a determination of evil in a person is, in itself, impossibility. For the human being, this may in fact be true. Perhaps it is God alone who knows the true psychological nature of a person and thus can make a determination that one's action was motivated by evil. This may also be part of the rationale for the view of Rabbis Tarfon and Akiva. Who am I, as a human being, to render a decision regarding the nature of another person, which declares him/her evil and deserving of the death penalty? The myriad procedural and evidentiary rules within the Jewish legal system clearly do seem to indicate a concern for the human being's ability to truly judge any circumstance, notwithstanding an honest desire to do so correctly and fairly. Perhaps, it is best to leave punishment to God.

Yet, the Bible still did call upon human beings to judge, to create a court system and police society. To this effect, Rabbi Shimon ben Gamliel, a president of the Sanhedrin, challenged the position of Rabbis Tarfon and Akiva, stating that they would increase the shedding of blood in Israel. It may be true - and no doubt it absolutely is - that God may be able to perform a task, undertaken by a human being, in an incomparably better way. In creating human beings, the perfect performance of a task, though, was not God's intention. He wished for humanity to grow, improve the self and the world, and thereby strive to emulate Him and bring Him into this world. To accomplish this goal, human beings must face the challenges that are presented in this world and respond to them as best they can. Society demands judgments and, despite our limitations, this is still a necessity.

How can we judge another human being? Who are we to assume such certitude? These questions are even more emphatic when one considers a penalty of death. Yet, in the interest of society, how can we not judge? How can we risk withholding the lesson of the severity of the consequences of an action by never carrying out the punishment that indicates this severity?

There is a tension between the frailty of the individual, both offender and judge, and the needs of society. The ongoing dialectic that is found within Jewish thought regarding capital punishment, ultimately, without taint, transmits this lesson.

Rabbi Benjamin Hecht received his rabbinic ordination from Yeshivat Beit Shmuel in Jerusalem in 1980. He is the Founding Director of Nishma, an international Torah research, resource, and educational endeavor. Rabbi Hecht holds degrees in law, psychology, and business and serves on the Rabbinical Advisory Board of Koshertube and as the Rabbinical Advisor to Yad HaChazakah-JDEC. He also blogs at http://nishmablog.blogspot.com. Rabbi Hecht lives in Toronto, Ontario.