The Lord is my Shepherd 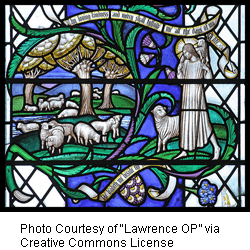 In ordinary time we live our lives according to compasses whose arrows are fixed firmly on our goals. Even as Christians, our goals most often aligned with the goals of the world. We too chase after the esteem of the crowd, after material comforts and lives of complacency and material self-indulgence. Yet the ultimate goal of the evangelical -- to love and have fellowship with God forever -- is different.

Our lives are often defined, however, by critical moments when our ordinary time is radically disrupted - for better or worse. These moments constitute a kind of sacred time, not because they are joyful, beautiful or soaked through with the presence of God-they may be the opposite-but because their repercussions reach into eternity. Suddenly we are set apart from our socially inherited ways of thinking about what is true and truly good; suddenly we are freed to reject what we never knew we had chosen, we become transparent to ourselves and a new vision of the world becomes possible.

The first moment in this sacred time could be called the Ledge. I stood upon the Ledge shortly before 7 pm on the 20th of February in 1996 when my body hung in the air above the horizontal bar in a gymnasium in California. I had just released the bar in order to warm up my triple-back-flip dismount, yet the bar had been loose and slow. Feeling something amiss, I let go of my knees and opened by body out straight. Even then it seemed as though the world fell silent and held still. I saw my teammates beneath me, turning their faces so they would not have to watch the wreck they saw coming. I saw the ground 17 feet beneath me, and I only hoped I would not hit the bar or land on my head. On the Ledge, all one holds dear stands on the precipice. Everything one has considered "good" may fall into a trackless darkness.

The second moment could be called the Shadowed Valley. I crossed the valley in a wheelchair, as a doctor pushed me toward my room at the Stanford hospital, where the neurosurgery team would screw a ‘halo' into my skull to stabilize my head and preserve what remained of my ruined neck. My gymnastics career and my Olympic dreams-for which I had fought with blood and toil, with broken bones and torn tendons, with heart-rending losses and dizzying victories, with weariness and anguish and many thousands of hours of training-were over. I was fortunate to be alive.

"You understand what this means, don't you?" asked the doctor. I realized I had been laughing.

For the doctor, navigating the world with the ordinary compass, I had just lost everything I had worked for. My dreams had been shattered along with two vertebrae and a vertebral disc. It was still possible I would be paralyzed from the neck down, and in fact I will live the rest of my life with severe chronic pain. Much of what the world considered ‘good' had just been denied me.

Yet suddenly what the world deemed ‘good' seemed a trifling matter to me, absurdly unimportant, even detrimental to what I really wanted. I don't know if I have ever known a purer joy than I knew in the anodyne halls of the Stanford Hospital. The contingency of life had stripped away my hopes and my health, even my identity, and yet the love of God was present to me in a way I had never experienced before. The world could take away almost everything, but one thing it could not take, and that one thing was enough and more than enough and all that really mattered. If I could have the greatest Good even in the Shadowed Valley, when every other "good" is stolen from my grasp, then what should I fear? What is the loss of dimes and nickels when the pearl of great price is mine, given me in grace, held for me more securely than I could ever hold it for myself?

The third moment in sacred time might be called the Ascent, the climb out of the Shadowed Valley when we must determine the reality according to which we will live our lives. The crucial question is whether we will believe where the arrow pointed when we were in the Shadowed Valley, when the goods of the world seemed like rubbish or even "loss for the sake of Christ" (Phil 3:7), or whether we will believe where it points us in ordinary time, when the words and the goods of the world are so persuasive and so tempting.

I have never regretted breaking my neck. How could you regret a journey through the valley of the shadow of death, when you know that God was with you? The valley is filled with shadows, but shadows are merely inversions of light. The Shadowed Valley is not evil; it is a place where the light that shines in the darkness (John 1:5) reaches around the objects of the world and casts their shadows, showing us what is truly light and truly dark.