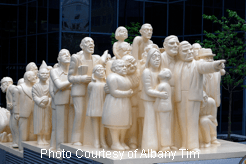 The saying is well known: If you bring two Jews together you will get three opinions. We are known for our fractious, contentious behavior and our surprising lack of unanimity on any number of fundamental truths.  Indeed, the list of major differences of opinions amongst Jews on issues related to ritual, text interpretation, and Jewish law is formidable. From the breakup of ancient Israel into the Northern and Southern kingdoms, to the Pharisees and the Sadducees, from Hasidim and misnagdim (opponents), to Reform and the ultra-Orthodox, the various opposing ideologies within Judaism are legendary.

It boils down to this: Chaim Weizmann and Harry Truman met secretly in March of 1948. During their meeting, Truman complained about how the Zionists were pressuring him to support the establishment of a Jewish State.  Truman said that he had to answer to a lot of people. "I am the president of almost 200 million people!" exclaimed Truman.  Weizmann dryly retorted, "Well Mr. President, I am the president of a million presidents!"

This fiercely independent attitude comes out of the philosophy that the Jewish tradition does not single out a select few people to tell others how to behave.  Every Jew has equal access to Torah. Every Jew must struggle to make meaning out of his or her relationship to God, to Torah, and to the Jewish people.

This means that there is an argument over just about everything, even over the most fundamental question of who is a Jew.  The Orthodox are generally horrified that Reform Judaism officially accepts as Jewish a person born of a non-Jewish mother but raised as a Jew by a Jewish father.  This means that a person may be considered and counted as Jewish in one community and in another be forbidden to be counted in a prayer quorum.  There is no place to adjudicate this dilemma - it simply points out the extremes of Jewish autonomy.

Of course, because Jews cannot be identified as one bloc of voters, or one unified constituency, they cannot exercise power in the same way as, for instance, the Mormon Church. American Jews are statistically the most liberal voters in the U.S., and many believe that this reflects a Jewish sensitivity to social justice and equality. But it is not because a leader is instructing them to vote in a particular way as Jews.

It would be a poetic way to conclude this essay by suggesting that only God ultimately speaks for the Jewish people.  But I don't even know what that means.  Surely Jews are no more in agreement about who and what God is or is not or what God says than on any other subject.  Not even the Holy One can help here.

And so, who speaks for us as Jews?  Currently that would be the roughly 13.3 million Jewish presidents in the world today.