Why Me? God and the Meaning of Life 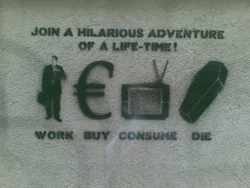 Postmodern culture has been characterized as the despair over the loss of objective meaning after the demise of modernism. It might be better characterized as the despair of modernism. After all, modernism, with its concomitant atheism, has been unable to provide human beings with any basis for objective value and meaning. In a world in which everything that exists is the result of an unplanned cosmic accident, it is difficult to imagine that human life has any objective value or meaning. In such a world, human beings are merely collocations of atoms that evolved for no rhyme or reason into sets of "selfish genes," and our every thought and deed is simply "dancing to our DNA." In such a world each one of us will soon die and be forgotten, and the entire human race, along with everything else, is destined to fade into oblivion with the hot death of the universe. The nihilism of postmodern culture is thus the inevitable result of modern atheistic humanism.

And so the perennial question of the meaning of life takes center stage in our day. We ask, "Why are we here? What is the purpose of human existence?" Or, more personally, "Why me? Why am I here? Is there any significance to my life in this world? A hundred, a thousand, a billion years from now will it have mattered that I lived and bled and cried and died in this veil of tears?" Modernism and its postmodern offspring leave us with no answers to these questions. They simply advocate, at best, that each person subjectively appropriate his own meaning and purpose. This is to say that each person is left to himself to invent the meaning of his life. Of course, what this really means is that each person is left free to pretend that his life has meaning. It does not mean that his life really, objectively, has meaning.

If anything is true of the Christian worldview, however, it is that it provides an objective basis for the meaning of human life. For we believe that there is an omnipotent, omniscient, and omnibenevolent God who created the universe for a purpose and thereby infuses every atom, every tree and mountain, and every human life with meaning and significance. Regarding human beings in particular the biblical testimony is that we have been created in the image of God (Genesis 1:27). Among other things, this means that we have been created to image or reflect God's character in the ways that we think and behave. So, it is as God's image-bearers in the world that human life finds its meaning and which sets us apart from every other existing thing with the unique value that only God's image-bearers can have.

Yet even recognizing that we are God's image-bearers, we might still wonder what the point of it all is in the end. What is the bottom-line reason for our existence? Why did God create us to reflect his image? The answer is summarized in the Westminster Catechism which begins with the question: "What is the chief end of man?" And the answer is as simple as it is profound: "The chief end of man is to glorify God and enjoy him forever." We exist to bring glory, honor, and praise to the source of our existence, to the magnificent, beautiful, and holy Creator of the heavens and the earth (cf. 1 Corinthians 10:31).

Lest one conclude that this answer to the question of life's meaning only entails a degrading enslavement to a divine narcissism, we need to emphasize the second half of the catechism's answer. We exist to glorify God to be sure, but also to "enjoy him forever." The point of this line is to communicate the Christian belief that true happiness is found only in communion with God (a communion secured, by the way, only through faith in Jesus Christ). Many philosophers have said that the goal of human activity is the achievement of happiness. Christianity emphatically agrees, yet points out that real happiness is found in God. More specifically, it is found in living a life aimed at loving him above all else and loving our neighbors as ourselves. In sweet communion with our Creator, then, is found true happiness and the fulfillment of our God-given purpose. As the psalmist put it, "At [God's] right hand, there are pleasures forevermore." (Psalm 16:11).

Steve is a Professor of Philosophy and Apologetics at Southeastern Bible College. He is also the Associate Director of the Apologetics Resource Center and the Editor of the Areopagus Journal. He has a good track record of publishing content for both academic and popular audiences. He (and his co-author, Jim Spiegel) just published The Love of Wisdom: A Christian Introduction to Philosophy (Broadman & Holman).