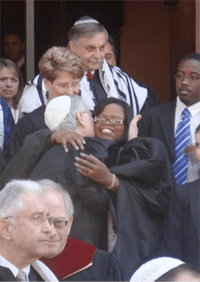 On the morning of Saturday, June 6, in downtown Cincinnati, the sun shone brightly as the storm clouds of the past few days gave way to clear blue skies. The streets were relatively clear, save for a lone patrol car and two mounted police blocking the street in front of historic Plum Street Temple.

Inside the temple, an historic moment was about to take place as 45-year-old Alysa Stanton prepared to be ordained from the Hebrew Union College - Jewish Institute of Religion as the first African-American female rabbi. Plum Street Temple was filled with quiet worshippers, awaiting the ordination of Stanton along with thirteen other rabbis. Daylight streamed in through the stained glass windows, while overhead hundreds of bare incandescent light bulbs lined the ceiling.

The ordination proceedings stood in sharp contrast to the media frenzy surrounding Stanton, which over the last few months has reached fever pitch. As the cantor led the singing, a chorus of melodic Hebrew was the only sound from the congregation. Serenity was the order of the day, and it quickly became clear that the formality of the service would make no distinction between Stanton and the thirteen other rabbis on the stage. All stood as equals in God's creation, and all were given equal respect as they each quietly crossed past the bimah, to the ark at the back of the sanctuary, before returning to their seats. The congregation sat in reverent silence through the service, prayers, sermon, and full ordination proceedings.

In his sermon, HUC President Rabbi David Ellenson spoke highly of the graduating class. He said that the ordination was "a holy moment" in the lives of the soon-to-be rabbis, and they would soon be encountering new people and making new relationships. "The only problem with a relationship is that it involves other people," Ellenson joked, as a quiet laugh bubbled from the congregants. The difficulty in building relationship, he noted, is that while "humanity is easy to love, persons are difficult."

Finishing his sermon, Rabbi Ellenson stepped back to the ark and began calling the names of the graduates. When Stanton crossed before the open ark, Rabbi Ellenson said he was honored to call her Rabbi, and bestow the ordination of rabbi upon her. Stanton was clearly teary-eyed as she left the platform and returned to her seat, disappearing amongst the other rabbis. Her white tallit and black robes were indistinguishable from the surrounding college faculty.

Among those in the congregation on hand to witness Stanton's ordination was Rabbi Capers Funnye, the African-American chief rabbi of the Beth Shalom B'nai Zaken Ethiopian Hebrew Congregation in Chicago. Rabbi Funnye also became something of a media darling once it was discovered he was married to Michelle Obama's cousin.

In a telephone interview with Patheos following Rabbi Stanton's ordination, Rabbi Funnye said, "I'm extremely proud of [Rabbi Stanton] and couldn't be happier for her and the Jewish people. I know she's going do an excellent job as both a rabbi and as a representative of Judaism."

With the service over, the press was ushered outside and into the street, as the newly ordained rabbis poured out the building. Each was surrounded by friends and family, but cameramen joined Rabbi Stanton as together with her 14-year-old daughter, Shana, she was ushered into the courtyard to attend a short press conference.

Below photo: Rabbi Stanton and her daughter, Shana

Having been described earlier in the press as "a new face of Judaism," one reporter questioned whether Stanton could describe the old face of Judaism. Rabbi Stanton suggested that she was merely a visual figure for "new diversity within Judaism," and that she was "representing the diversity within Judaism that has always been." When the reporter countered, "But the press release says..." Stanton quickly cut him off, saying, "I understand what the press release says, but I'm telling you what I'm saying." Her response was strong and resolute, skills she undoubtedly honed during her long journey from conversion to ordination.

When asked by another reporter if becoming the first African-American female rabbi was "as big a deal as it's made out to be," Stanton replied, "Well ... you spend five to seven years in rabbinical school at HUC, and you realize it's a big deal. It's a big deal for all of us."