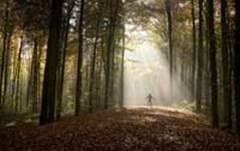 Job layoffs and an anemic economy are pushing many Christians to question the purpose of their lives, yet I meet very few who are thinking in terms of the "good works" God had in mind when he designed them.

Each of us has a high calling we are obligated to follow. When we follow our calling, this brings God great glory and us great joy.

The quest to discover our calling should begin with four facts we know for certain:

1. Our calling is embodied in our gifts, both natural and spiritual, that were given to us intentionally by divine design.

2. Our gifts come with a responsibility: "As each one has received a special gift, employ it in serving one another as good stewards of the manifold grace of God" (1 Peter 4:10).

3. Our gifts allow us to do excellent work, make our greatest contribution to the human race, and do the "good works" God had in mind when he designed us.

4. Sometimes this is difficult. What God has in mind can be costly, inconvenient, and countercultural.

Case in point: During the first three decades of the nineteenth century, William Wilberforce fueled social and spiritual reform in Britain -- the abolition of the Atlantic slave trade and, eventually, complete emancipation. His work shook the British Empire to its core. According to historian John Pollock, the abolition of the slave trade was "the greatest moral achievement of the British people."

But Wilberforce almost missed his calling. When he came to Christ at age twenty-five, he was one of the youngest members of Parliament. In search of God's will for his life, Wilberforce visited John Newton, a repentant slave-trader turned pastor. The young statesman told Newton that since God was surely more interested in religion than politics, he planned to leave parliament and take up ministry. Newton rightly disagreed about what was eternally significant and suggested that God might have him in parliament for a reason. "It is hoped," Newton wrote, "that the Lord has raised you up for the good of the nation."

Indeed he had. On October 28, 1787, Wilberforce wrote in a journal: "God Almighty has set before me two great objects, the suppression of the Slave Trade and the reformation of Manners [moral values]." The young parliamentarian had discovered the "good works God had prepared in advance" for him -- but they were works that would cost the British economy dearly.

One historian termed the abolition of slavery "voluntary econocide" because it triggered government payouts of twenty million pounds sterling to slave owners. (In today's terms, an economic bailout of slave owners would total more than $500 million dollars.) Ending slavery affected every stratum of society as the cost of food and other goods increased and crippled the British economy for an entire generation.

Using his God-given abilities in the power of the Spirit, Wilberforce turned his country from horrendous evil and gave his countrymen the moral backbone to endure the financial recession brought on by emancipation. And as the British economy suffered, God's Kingdom grew. A revival that had begun in the lower classes in the 1700s erupted into the middle and upper classes in the 1800s, and altered Britain's moral compass.

When reading about his life, we can see that Wilberforce had a choice. He could have hunkered down, minded his own business, and lived a comfortable life afforded by his family wealth. But instead he chose to follow Peter's admonition: to employ his gifts in serving others as a good steward of the manifold grace of God.

The issues Wilberforce took on were much graver and caused a societal crisis with greater economic implications than those we face today. His commitment and courage to use his gifts and follow his calling, no matter the cost, provide an example for us nationally and individually as we go about our daily work.

What is the "good work" God has called you to do? There's no time like the present to make sure that the work you do fits the gifts God gave you. After all, " . . . we are God's workmanship, created in Christ Jesus to do good works, which God prepared in advance for us to do" (Eph. 2:10).

Bill Peel is the best-selling author of six books and leader of the 24 Seven Faith Project. He co-authored the highly successful Saline Solution continuing medical education course and has taught thousands of healthcare professionals around the world how to effectively communicate faith to their patients.

He is a graduate of Southern Methodist University and Dallas Theological Seminary. He and his wife Kathy have three grown sons and live in Dallas, Texas.

This article first appeared as "Discover Your Gifts, Discover Your Calling," and appears with permission of TheHighCalling.org.

Photo by C. C. License courtesy of kwerfeldein at Flickr