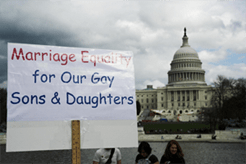 The Public Square at Patheos offers a rich and lively discussion on the contentious issue of same-sex marriage, with authors representing standpoints all across the theological and political spectrum. Collectively, the articles sketch out the contours of the broader debate in the United States and beyond, which takes place on at least three levels. The first level is theological and ethical: are homosexual relationships wrong and therefore contrary to the divine design of marriage? The second level is social and political: what would be the effects of the legalization of same-sex marriage on society as a whole, and does a secular government have any legitimate interest or right in deciding what constitutes a "marriage" as such? Finally, the third level is tactical: is the gay community wise (or betraying its own values) to press for the legalization of gay marriage, and are certain religious groups wise (or acting against their interests) to oppose it?

Five authors, writing out of the Muslim, Mormon, Jewish, Catholic, and Protestant faiths, explain why their traditions oppose same-sex marriage as contrary to God's intention.

Jonathan Brown explains that the great majority of Muslim legal scholars, citing the rulings of Muhammad and the biblical story of Lot in Sodom, have condemned homosexuality and sanctioned it with severe punishments. Given the Muslim legal view of marriage as an exchange of protection and provision for exclusive sexual and reproductive privileges, same-sex unions cannot constitute "marriage" in the Muslim legal sense. Yet homosexual relationships have often flourished underneath the surface in Islam's most sophisticated societies, and some liberal Muslims are now contending that Islam properly understood does not condemn homosexuality.

Guy Murray explains how the Bible as well as the continuing revelation given to the prophets and leaders of the Mormon Church show unambiguously that marriage must be restricted to men and women. Since the family lies at the heart of Mormon faith and practice, asking Mormons to change their position on same-sex marriage is asking them to abandon "the most core and fundamental Mormon religious beliefs." In the aftermath of the victory of California's Prop 8, Mormons' "very right to maintain and assert these beliefs has come under vicious assault."

Likewise, in the view of Rabbi Tzvi Hersch Weinreb, the scriptures and sources of the Jewish tradition, set forth over the course of three thousand years, are "remarkably terse, cogent, and absolute" on the subject, presenting "unanimous and uncompromising ... opposition to all forms of homosexual activity." Orthodox Jews have a right, he says, no less than any other party in the democratic social process, to seek to shape the moral culture around them.

Father John Harvey presents a Catholic view of why same-sex unions "are not in agreement with natural moral law." The complete bodily and spiritual communion of male and female, and the procreative complementarity they find in one another, he claims, is the essence of marriage. Catholics should reject the moral relativism that "accepts no objective criteria to distinguish good sexual behavior from bad," and instead should affirm the clear deliverance of scripture, revelation, and natural moral law, which together "give to man and wife the power and grace to form a perfect union of body and soul, out of which come mutual love and children."

Finally, writing as a Mainline Protestant, Kristin J. Tremba points to "centuries" of tradition in the Christian Church that have understood marriage as the union of male and female. As she puts it, "Two men united in marriage remain two men, and two women united in marriage remain two women. However, a husband and wife united in marriage creates something new - a ‘one flesh' union. This marital oneness reflects the oneness of God, and as the oneness of God creates new life, marital oneness has the potential to create new life via children." Tremba recounts her own story of "turning away from homosexuality and of finding freedom from same-sex attraction" -- a story she claims should not be surprising to Christians who believe in the transformative power of their faith.