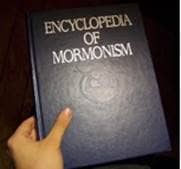 The Encyclopedia of Mormonism was published by non-LDS Macmillan Publishing Company in 1992. Recently made available online in its entirety, the Encyclopedia provides a useful beginning point for understanding Mormon history, doctrine, culture, etc. The text itself is electronic, but includes links to pdf scans that preserve layout and images (500+ images and 50+ maps and charts).

While most contributors of the 1128 articles were LDS academics or specialists, in some cases non-LDS scholars with particular areas of expertise contributed as well. For example, Krister Stendahl, the former Lutheran Bishop of Stockholm (Sweden) and Dean of the Harvard Divinity School, long a friend to the LDS Church, authored the entry titled "Baptism for the Dead: Ancient Sources."

Though the Encyclopedia was neither published by the LDS Church nor bears any mark of official approval, its writing and editing received close attention from two LDS Apostles, Elders Maxwell (a former political science professor) and Oaks (a former Utah Supreme Court judge.)

Reviews of the Encyclopedia were generally positive, though they pointed out minor errors. The Journal of Mormon History includes some history of how the Encyclopedia came about. Other reviews were published in FARMS, BYU Studies, Sunstone, and Dialogue: A Journal of Mormon Thought (by a non-LDS atheist and a disbelieving LDS philosophy professor). Other criticisms generally stem from the fact that the work was not exhaustive in scope, depth, or bibliographic materials. Nevertheless the online version of the Encyclopedia of Mormonism serves as an easily accessible, useful, and introductory reference.