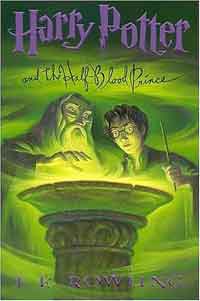 I can date precisely when my dangerous dalliance with Harry Potter began.

I had seen the news stories, of course, which mostly consisted of long lines of nerdy boys and girls waiting outside of bookstores each year in glasses and striped ties. Since Harry Potter bears a striking resemblance to the title character of Where's Waldo?, I could not tell whether these were Harry Potter release parties or Where's Waldo? conventions -- which would, it seemed to me, be exactly contrary to the spirit of Where's Waldo? But no sooner had I begun to separate Harry and Waldo in my mind than I was informed by these reports that I, as a Christian, was supposed to be Gravely Concerned about Harry Potter's corrupting force upon children.

I had never met any such Christians, but they must have been out there in droves, because that was all these reporters talked about. Apparently the county franchise of Gravely Concerned Christian Parents was keeping constant surveillance over the local goat populations, fearing bands of children might be roaming the countryside with broomsticks between their legs in search of sacrifices for someone whose name sounded like Lord Value Mart. They had not yet caught any such nefarious bands of prepubescent children -- which was surprising, because it's not easy for ten-year-olds to run with goats slung over their shoulders and broomsticks clutched between their legs -- but the Value Mart got lots of free publicity and the local cow-tipping clubs nearly went out of business.

These reports and their solemn warnings still lingered in my memory when, on Thanksgiving in 2002, I first heard Harry Potter read aloud. Living in Princeton, New Jersey, I had been invited to the home of a Christian theologian of formidable reputation. This man, towering in mind and frame (he is closer to seven than six feet in height), discussed football and beer with the same dry, languid world-weariness that characterized his lectures, as though his mind had so penetrated the mysteries of the cosmos that nothing could excite him. Yet when he read Harry Potter, he was animated and joyful.

I became Gravely Concerned when I saw goats and pigs watching nervously from a neighbor's yard -- but I was anxious to make a good impression, and his children did not have that look in the eye that children get when they're about to sacrificed hoofed mammals. So I sat and did nothing while this man whom I admired recklessly endangered the spiritual welfare and eternal destiny of his children, the safety of the local goat herds and the future of mom-and-pop stores that cannot compete with Value Mart.

It was not difficult to see why his better judgment was overpowered. Rowling's writing is not without its virtues. Every stone at Hogwarts is finely and lovingly crafted. Filled though it is with satanic rituals like Quidditch and the rampant underage drinking of butterbeer, Rowling's world is clearly the product of an endlessly (and suspiciously?) fertile creativity. (Can you say deal with the devil? Judas K. Rowling can. And so can your children.) Some of her characters are archetypes, some caricatures, yet those who occupy the emotional heart are so familiar you might have known them in school. Rowling spins a new world into being, yet never lets it lose its emotional axis; she expands the sphere of the imagination with dragons and dementors, gryphons and grindylows, yet the center always holds in universally human experiences of growing up, falling in love, facing fears, confronting death.

So, with my moral reflexes dulled by tryptophan and a bottle of Guinness, I relaxed the spiritual musculature that protects the Christian from demonic influence. In retrospect it is clear that Satan was at work, or at least Lord Value Mart, for even my intellectual pride softened its usual protest. I was exchanging Kierkegaard for Kreacher, Levinas for Longbottom, Camus and Sartre for Crabbe and Goyle -- and I felt no shame. I should have known I was under some sort of Confundus charm when Dobby seemed like the height of comic genius. But I was led astray. If this renowned theologian could delight in Harry Potter, then certainly I could do the same with no loss of self-respect.

The downward spiral sloped gently at first. My wife and I began to read the latest volumes of Harry Potter together at night. It was a scene straight out of Norman Rockwell -- if Norman Rockwell were a Satanist! The New England snow drifting past the window, the lamp shedding its light in a soft golden cone, a young couple huddled together beneath a book -- as, unbeknownst to both, the fates of their everlasting souls plunged downward into the stinking pits of the deepest bowels of hell. But we enjoyed following Harry, Ron, and Hermione through all the travails of adolescence. Since my wife is of Chinese descent, we laughed at Harry's "yellow fever" crush on Cho Chang. We cheered when Ron and Hermione "snogged" at last, and we supported the entire roster of S.P.E.W. candidates in the 2006 midterm election.