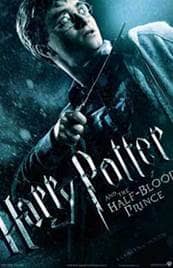 Harry Potter and the Half-Blood Prince, the movie adaptation of the penultimate volume in the wildly popular series by J.K. Rowling, opened in theaters on July 15.  Originally scheduled for a Thanksgiving 2008 release, Warner Brothers delayed it to last week in hopes of guaranteeing another summer blockbuster along the lines of last summer's The Dark Knight, which stunned industry insiders by grossing over $1 billion worldwide in total box office receipts.  Batman had 33 weeks to earn that kind of money.  Harry Potter earned nearly $396 million worldwide in its first five days.

The runaway popularity of the books attracted the interest of Christian reviewers from the start.  How have they responded to the latest movie?  Movieguide, the internet magazine founded by Dr. Ted Baehr and affiliated with the Christian Film and Television Commission ministry, gave the Half-Blood Prince a rating of -2, or "Extreme Caution -- Discretion advised for adults."  Movieguide's rating system spans a range from +4, or Biblical, to -4, or Abhorrent.

While readers normally expect Movieguide to give Harry Potter a -4, the Half-Blood Prince earned a -2 because the violence and witchcraft are simply not as troubling as they are in previous Harry Potter movies.  The state of the world in the Half-Blood Prince appears fallen; no one who uses witchcraft appears to be having any fun; and the magical spells seem less like a challenge to God's authority and more instrumental, as tools to achieve particular ends.

In a related article, Dr. Baehr explains how to "Protect Your Children from Harry Potter Occultism."  Though the film only earned a -2 rating, it still teaches moral relativism, and refers neither to God nor the Bible.  Harry Potter is still a threat to children, because the Bible, in Dr. Baehr's view, is clear about the evils of witchcraft and sorcery.  Parents and grandparents must protect their children from Harry Potter, a gateway to the occult, which will place children under the control of the Devil and his minions.

The Vatican took a somewhat different view of the movie.  The Vatican newspaper, L'Osservatore Romano, gave the Half-Blood Prince 4 stars, praising it for promoting the values of friendship, altruism, loyalty, and self-giving.  While sharing Movieguide's concern for the lack of reference to God as the ground of morality, L'Osservatore Romano noted that the movie makes a clear distinction between good and evil, and also makes it quite clear that identifying with the good is much preferred to identifying with evil, even though doing good can require hard work and sacrifice.  The magic used in the series, the Vatican notes, is reminiscent of the use of magic in many classic fairy tales.

The Roman Catholic Church's multimedia network Star Quest Production Network has a popular podcast series on Harry Potter that should offer something delightful to anyone interested in exploring the religious aspects of the popular series.  Check out such titles as "Potter and the Pope," in which a Vatican official clarifies that there is nothing wrong with Harry Potter, or "Labyrinths and Magical Mazes," which explores the origins and symbolism of these fascinating 3-D puzzles.

The Harry Potter franchise is so popular that you might feel left behind if you don't go see the Half-Blood Prince.  But be prepared.  Movieguide makes a number of good points.  These young protagonists live in a miserable world.  Fun is a rare thing at Hogwarts.  The acting is frequently one-dimensional or stilted, or just plain ridiculous.  Daniel Radcliffe in particular seems most unequal to the task of carrying the film emotionally.

Also, if you haven't read the books, then you will be at a real disadvantage.  The filmmakers spend no time on back-story, so you may have trouble figuring out just what was so wrong with Tom Riddle, or why the Weasley's home is so important, or what makes Remus nervous, or why Harry tells his teacher that he is "the chosen one."  And sadly, when the identity of the Half-Blood Prince is revealed, people not in the know are left to wonder why it mattered.  It must be one of the most anticlimactic moments in film history.