This is a part of the Faith@Work Consultation. See the guide for a list of other articles, or join the conversation on the Discussion Forum. This series will investigate what insights can be gained from Jesus teachings from His famous "Sermon on the Mount" on the topic of how to build trust in the workplace. 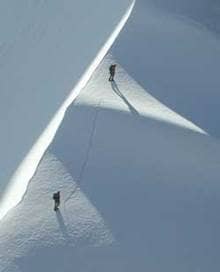 One thing at which human beings are universally adept is assigning blame. Blaming is basically an exercise in distinguishing justice from injustice. Who should be punished for the economic crisis -- the big banks, the Federal Reserve, the President? Who is responsible for the sub-prime debacle -- the government's mortgage regulation laws, the lenders, the borrowers?

While there is no clear scapegoat for the current crisis, one result of recent events is a growing sense of apprehension and distrust related to the business world. Many people feel a deep sense of injustice concerning the whole affair, but most do not have a clear sense of where the blame lies. In a recent survey by McKinsey, five different reasons were cited by over 25% of respondents for causing deepening public distrust of business, including distrust of companies' risk management and executive compensation policies.

Trust is not only "the engine of the market," as D. Michael Lindsay has written. It is also the engine of any particular business, and without it the workplace grinds to a halt in suspicion, dissension, and animosity. Christians can give witness to the character of Christ, and can serve their employers faithfully, by showing themselves trustworthy and creating an environment of trust and harmony.

In Plato's Republic, Socrates communicates important insights into the nature and causes of injustice. When his companions ask him to demonstrate that a life of justice is better than a life of injustice he proposes to look at the life of a city. Socrates begins by describing the citizens in various kinds of work -- farming, blacksmithing, etc. He and his companions agree that individuals should concentrate on specialized areas of work and share their excess products with others. One person, for instance, will make all the shoes and trade the shoes he does not need for the food the farmer does not need.

His description of a city provides a wonderful picture of social harmony. All people share the excess of their labor and all have their basic needs met. It's not hard to imagine that it could work. (I was recently told by an economist that in most industrialized societies today approximately 5-10% of the workforce is needed to provide the food production necessary to sustain the population.) As Socrates concludes his description of the city, one begins to wonder where injustice could be found in such a harmonious society.

Let's see what sort of life our citizens will lead when they've been provided for in the way we have been describing. They'll produce bread, wine, clothes, and shoes, won't they? They'll build houses...wear adequate clothing and shoes in the winter...And so they'll live in peace and good health, and when they die at a ripe old age, they'll bequeath a similar life to their children.

The discussion, however, takes a significant turn when Socrates' friend raises an objection: "But, Socrates, there are no luxury goods." Glaucon's remark reveals the heart of the matter -- and reveals the human heart. Glaucon does not care primarily about jewelry or fine items; he cares about social distinction. Luxuries represent success, winning, outdistancing others. The executive's BMW and the gang member's expensive sneakers are more than just a means of getting around. They're a means of getting ahead. After Socrates reluctantly admits luxuries into his city state many new topics enter the discussion: crime, war, social unrest.

What lies behind the desire for luxury items? We may call it any one of several things: self-interest, greed, ambition, pride, sin. I will call it a self-serving compulsion. It is a compulsion that grasps for more than just basic physical needs; it leads people to strive also for physical pleasures, recognition, reputation, domination, power, and more. It resides in our hearts in various forms and degrees. The self-serving nature of people is revealed as much in blatant abuses of political power as it is in the subtle self-seeking of one's work life.