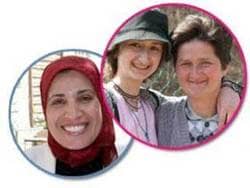 "Hope is based as much in stubbornness as it is in dreams. Don't let anyone take it away from you." – Patricia Smith Melton, Founder of Peace X Peace.

In January 2002, six women gathered for a three-day forum on the topic: "What is peace, and how can women be empowered to bring it in?" The women were from different religious beliefs, cultures and life experiences, but they all were viewed as leading figures in the areas of peace and women's rights.

Their gathering was conceived in a hotel room in San Francisco on September 18th, 2001, days after the terrorist attacks of September 11th. Patricia Smith Melton was awakened from her sleep with a deep sense of palpable presence. She felt she had been given an assignment by the presence to work through women to bring peace. A few months later, the first women's circle had gathered.  That circle launched a movement that became Peace X Peace (read aloud as “peace by peace”). At the heart of Peace X Peace are circles of women that connect to other circles through the Internet. They share about their cultures and their actions for peace, providing each other mutual support and encouragement. In just a few short years, Peace X Peace has grown exponentially with circles in more than 100 countries. The vision of this growing women’s movement is that by joining together they can develop the critical mass of consciousness to shift societies around the world from violence and war toward the peaceful resolution of conflicts.

Patricia Smith Melton had a full career as an artist, writing plays and poetry and working as a photographer. She continues to use art, including documentary filming, as part of her peace work. Her documentary "Peace X Peace: Women on the Frontlines" premiered at the United Nations, received two film awards and was broadcast on more than 300 public television stations.

In 1991 Smith Melton and her husband William Melton established the Melton Foundation. The mission of the foundation is “to build a world-wide community of talented people from diverse cultures capable of addressing global issues based on principles of open communication and mutual respect.” To carry out this mission, the foundation sponsors various activities for people to gather together both face-to-face and in on-line cyber-communities for cross-cultural training and social-professional interaction. For Smith Melton, the values of relationship and communication are central to bringing about positive change in the world, and these values have shaped both the work of the Melton Foundation and the vision of Peace X Peace. The divides of religion, culture and inequality can be bridged as people encounter one another and learn from each other.

This work of connecting people for the long-term goal of peace is a spiritual calling, she says. Smith Melton was raised in a mainstream Protestant church. She speaks of a creative “triangle” in her life of “spiritual awareness, pain in the world, and inner freedom.” That triangle of spirituality, pain and freedom is part of what inspires her to connect women of different religious faiths, nationalities and backgrounds so that they can collaborate for peaceful positive change in the world. But her dreams are not all the sweet fluff of peace. She says, “Hope is based as much in stubbornness as it is in dreams. Don’t let anyone take it away from you.”

In her latest project, Smith Melton has sought to address what she calls “the world’s deepest wound,” the division between Christians, Jews and Muslims in Israel and Palestine. She has worked on bridging cultural-religious divides in the Middle East with a particular focus on the role of women in transforming the conflicts. A book, Sixty Years, Sixty Voices, collecting the voices of 60 Israeli and Palestinian women, is the fruit of her efforts to connect to women and open the channels of communication.

Patricia Smith Melton envisions a transformation in the world in which a more powerful voice is heard from those most marginalize -- women. For her, ordinary people are extraordinary, so the telling of their stories unleashes powerful forces for change. Using today’s technology through film and the Internet, these voices and stories can support transformative action around the world.


This article was originally posted at www.readthespirit.com.
David Crumm is an author, journalist, and filmmaker with more than 20 years experience as a Religion Writer for the Detroit Free Press, Knight-Ridder newspapers, and Gannett. Crumm is now the Editor of ReadTheSpirit – a new online home for important voices in religion and spirituality.