A Dishonest Review about Islam

Whoever selects and assigns the books on Islam for the Sunday New York Times Book Review needs to widen his reading and add some new names to his rolodex.

Last week there was a rave review of Bruce Bawer's alarmist book Surrender (the subtitle says it all: Appeasing Islam, Sacrificing Freedom). 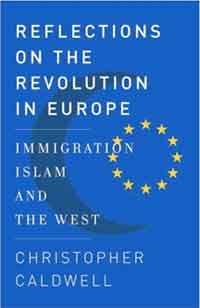 This week, the cover of the Book Review has a picture of a group of fully covered Muslim women set against a crowd of 'normal-looking' mostly-white Europeans with the headline "Strangers in the Land."

The review betrays more about the opinions of the reviewer -- the noted and controversial academic Fouad Ajami -- than the book under consideration, Christopher Caldwell's Reflections on the Revolution in Europe.

Ajami opens his piece by juxtaposing two disparate pieces of history: the departure of Spain's last Muslim ruler in 1492, and the terrorist attacks on Madrid in 2004. "A circle was closed," Ajami writes, "and Islam was, once again, a matter of Western Europe."

The Muslim presence in medieval Spain is widely regarded as a time of tolerance, good government, and support for the arts and education. In fact, Ajami himself wrote a positive review of one of the many books on that era, Maria Rosa Menocal's The Ornament of the World. Placing Al-Andalus, as it was known, in the same breath as a ghastly terrorist attack -- as if to say 'Here's what happens when Muslims are around' -- is beyond questionable. A dead fish wouldn't want to be wrapped in a newspaper article with that level of intellectual dishonesty.

I am with Ajami when he goes after the "militants, freeloaders and opportunists" discussed in Caldwell's book - the imams who criticize Western culture while living off the European welfare state, the Muslim men who refuse to educate their daughters and practically lock their wives in the kitchen, the Muslim youth who threaten the societies they should be seeking to contribute to. But, having lived there for three years, I know this is far from a full description of Muslims in Europe. In fact, Ajami's obsession with such characters (undoubtedly real, but how representative?) again reveals something about himself.

He refers to Europe's Muslims as "guests" (quotation marks his), and says that they have overstayed their welcome. And then, in a peculiar turn, he tells the story of his own immigration to America. Why is he not a guest who has overstayed his welcome? Ahhh, because as he says, "I, and others like me, accepted the rupture in our lives ... I accepted the 'differentness' of the new country ... I needed no tales of the old country."

Is this America he is talking about? This country that was build on immigrants coming and bringing the best of their heritage - arts, cuisine, work ethic, commitment to education, and yes, religious tradition. I mean, where would we be without Catholic universities or Jewish philanthropy? Does Ajami really think nations are build by immigrants leaving their heritage at home?

Ajami, of all people, should know better. It's not like he became an engineer or a doctor. He is an immigrant from an Arab country who has made his career as an expert on the Middle East. Of course he brought parts of it with him.

As I came to the end of the review, I found myself wondering whether Ajami was simply in a foul mood when he wrote this. An academic of his stature certainly understands that the 21st century is going to be in large part about how relatively homogenous 'host societies' integrate immigrant communities. As Michael Walzer once wrote: the challenge of the diverse society is to embrace its differences and maintain a common life.

That suggests responsibilities on the part of the indigenous population (who, after all, needs the labor of the newcomers) and the immigrant community. Both need to embrace and maintain. Both the common life and the differences are important. The hope is that the differences contribute to the common life - strengthening and expanding it.

Islam has much to contribute to the West. Some loud and boorish Muslims in Europe claim Islam can only dominate. And, yes, a few of them are dangerous to Europe - including the Muslims of Europe. Some Westerners are responding by viewing Muslims as perpetual guests - migrant, temporary, throwaway labor - not neighbors and citizens. It's a framing that helps neither the old Europeans nor the new ones.