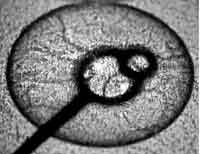 Nowadays most rabbis agree that the commandment to populate the world is so important that many modern technological developments for assisting infertile couples may be permitted by Jewish law. They say that in case natural reproduction does not succeed, it gives a tacit approval for assisted reproduction.

The implied flexibility of the Torah regarding assisted reproduction should not surprise us. After all, three out of four biblical matriarchs suffered from infertility. The Torah documents in Genesis the suffering of Sarah, Rebecca, and Rachel due to infertility. The narrative provides much of the human drama in the relationships between the matriarchs and their husbands, and the matriarchs and God. The three matriarchs dealt in different ways with their tragic circumstances.

Sarah bitterly resigned herself to not having children, and even laughed a cynical laugh when presented with the possibility of conception at an advanced age. Rebecca was more positive. She asked Isaac to intervene on her behalf and Isaac's prayers were answered. Rachel used desperate measures. She declared to Jacob: "Give me children, otherwise I am dead." The commentator Rashi explains that this statement signifies that a childless person is accounted as dead.

Rachel's next act was even more desperate. Reuven, the firstborn son of Leah, returned from the field with some plants called "dudaim" (Genesis 30:14). The biblical commentator Nachmanides suggested that these plants were herbs that promoted conception. Reuven presented them to his mother for her use. Rachel observed this and begged her sister for the plants. Then she made a deal: in return for the dudaim she would allow Leah to spend one night with Jacob. Ironically, Leah's fifth son was born as a result of this deal. And because of Rachel's desperation this "assisted reproduction" achieved its goal for her as well. Rachel was finally "remembered" by God, and she conceived and bore Joseph. She then states: "God has taken away my disgrace."

Infertility was not only a painful and tragic experience for the Matriarchs. It continues to afflict many Jewish couples. The biblical notion of infertility was that it was due to the female. Surprisingly, the cause of infertility among Orthodox Jewish couples today is predominantly due to male factors. Dr. Vincent Brandeis, who runs fertility centers in New York (U.S.A.), has estimated that in 60% of Orthodox patients infertility is due to problems with sperm quality. This compares with close to 50% male factor infertility in the general population. The reason for this difference may have to do with the low incidence of pelvic inflammatory disease among Orthodox women who are generally sexually inactive before marriage. Pelvic inflammatory disease increases the rate of female infertility in the general population so that it slightly exceeds male infertility.

Talmudic ideas of reproduction in many ways reflect the notions of those times. "Our Rabbis taught: There are three partners in man: The Holy One, blessed be he, the father and the mother. The father supplies the semen, the white substance, out of which are formed the child's bones, the sinews, the nails, the brain and the white of the eye. The mother supplies semen, the red substance, out of which are formed the skin, flesh, hair, blood and the black of the eye. God provides the spirit, the soul, the beauty of the features, eyesight, the power of hearing, ability to speak and walk, understanding and intelligence" (Talmud, Tractate Nidda, 30a).

Although the Talmud was unable to explain the scientific mechanisms of inheritance of traits, it was enlightened in assigning a role to the female "semen." Many scholars of that time believed that the female simply provided an incubator for the male seed to grow into a child. Even the Torah recognized the presence of a female seed with the passage: "If a woman emits a seed" (Leviticus 12:2).

Today, of course, we know of the genetic mechanisms of inheritance. There are many thousands of genes inherited by a child, which control the physical attributes of the child. For most traits a child inherits two copies of each gene, one from the mother and one from the father. The individual copies of each gene can interact with each other. A copy from one parent may be dominant over the other, and be preferentially expressed in the child. Or the two copies may work together to produce a combination or blended trait.