Catholics Do This but They Don't Do That: #1 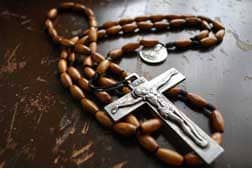 You see a guy reach into his pocket and pull out a series of beads wound together on a metal chain with some sort of medallion on it. Oh, must be a Catholic rosary, right? Maybe, but it could also be a Muslim misbaha, or possibly a Buddhist japa mala; turns out a whole host of religions use some form of prayer beads.

Listen to the folk tales and you'll hear that the Catholic version got handed down straight from heaven: the Virgin Mary appeared to St. Dominic in the 13th century and gave him the first rosary, telling him that it would help him convert the heretical Cathars. Nice story, but it's not quite the actual chain of events.  Before Y1K, Irish and Anglo-Saxon monks and nuns were praying the Psalms in three sets of fifty each for the magic total of 150; by the 12th century some people were using beads to count out 150 Our Fathers (much easier to remember), and by the 13th century it had become 150 of the even-shorter Hail Marys. Over the course of the 15th century people began associating mysteries (important moments from the life, death, and resurrection of Jesus) with the prayers, and by the end of that century the rosary pretty much looked like what we know today.

Question: Prayers and beads -- which one is the rosary? Answer: Yes. It's the string of beads and the set of prayers: you use a rosary to pray the rosary. And it's gotten a bit more complicated over time. Rather than just 150 Hail Marys, Catholics now say a whole series of prayers, including repetitions of an Our Father, 10 Hail Marys and a Glory Be; each repetition is called a decade, and five of them make one full round of the rosary. The regular rhythm and flow of these prayers create a mental space where the believer can meditate on one mystery for each repetition. Traditionally there were three sets of mysteries: joyous (surrounding Jesus' birth), sorrowful (recalling his death), and glorious (describing his resurrection). Pope John Paul II added a fourth set, the luminous mysteries, which are drawn from Jesus' ministry on earth.

Many Catholics carry rosaries around in their pockets and purses; there are versions made to fit around a wrist or even a finger. Praying the rosary is a really popular devotion, the kind the Church calls a sacramental: it doesn't bestow the same grace as a sacrament like Baptism, but by pulling the believers' thoughts toward God it opens them to that grace. And while rosaries may look like jewelry, most Catholics don't believe they should be worn as simple decoration. Putting a rosary around your neck or wrist to show your devotion is fine, but adding it because it totally rocks with your look doesn't fly. Nor should it be swung around over your head and used to lasso a bottle of ketchup from the other end of the table, or put to any other kind of use that doesn't center around prayer and veneration.

The Church teaches that these are disrespectful uses of what should be a call to holiness.

photo courtesy of dcfdelacruz via Creative Commons at Flickr