On Fathering a Daughter

In recent days, the Public Square at Patheos has addressed the issue of abortion. In the days to come, we at the Evangelical Portal will speak of adoption, foster care, and other ways of responding to the needs of orphans. These issues strike me with particular force right now, since my first daughter was recently born. I want to share that story and how it leads me to think differently of abortion and adoption.

When my wife showed me the positive pregnancy test, I was sure it was a mistake. When the second test returned a positive I believed the same, yet a butterfly began to flutter its wings against the insides of my ribs. Finally, although the third test did not entirely convince me either, I decided it would be cruel to my wife to continue in my skepticism. While she laughed like a little girl, I pretended to believe the test and joined her in celebration.

My disbelief was less scientific than self-protective. It was not merely that pregnancy seemed astronomically unlikely; it was that fatherhood had so long been the desire of my heart. My own relationship with my father is one of the best things in my life, and I have looked forward to fatherhood for as long as I can remember. Ordinary sixth-graders dream of winning ballgames and impressing girlfriends; I too dreamt of those things, but I also dreamt of taking my son for a walk in the park.

It was always a son. Always. I'm certain that this is because I treasured the father-son relationship. When my wife said that her intuition told her that the child was a boy, I figured that sounded about right. So you can imagine my surprise (and a little disappointment, I confess) when I heard that it was a girl growing in my wife's womb. In the weeks following, however, I found myself inexplicably overcome with emotion. I only had to think of the daughter that would soon be mine -- and my throat would grow tight and my eyes sting with salt. On several occasions I imagined the future with her and outright wept. Although it was a complete surprise to me, I knew then that God had been absolutely right to give me a daughter.

The mother is not the only one with a new life taking form within. Something was changing within me, subtly, mysteriously, sacredly. Every time I put my ear to my wife's belly or felt the hidden movements of our baby within her womb, something stirred within me as well. When we lay down each night, I read my unborn daughter a story, prayed for her, and told her how much we loved her and were proud of her already and could not wait to meet her face to face.

She was alive to me, sacred and holy, long before she was born, and well before she arrived I was ready to give my life for her. "You weren't really in love with your daughter," you might say. "You were in love with the idea of a daughter." No. No. I knew all that any parent needs to know in order to love a child: I knew that she was there, and that she was mine. Not mine to possess and control, but mine in that I brought her forth, and therefore mine to love and protect. In the highest sense, of course, all belong to God. Yet when we say that our children are ours, we mean that we are theirs.

At the start of the third trimester we went to the hospital to get a better sense of how our daughter was situated in the womb. The medical technician placed electrodes and monitors on my wife's rounded stomach, and left. As we sat alone in the small, dark room, the sound of our daughter's heartbeat came through the speakers and surrounded us. Just for a moment, it was not we who surrounded her, but she who surrounded us. We were caught up in her life.

Children enter the world amid a rushing fluid of numbers. After 3.5 hours of pushing, at 9:09 p.m. on the ninth day of the ninth month, my daughter was born at 8 pounds and 2 ounces, with ten fingers, ten toes, two healthy lungs, and one fierce cone-head. In numeration we seek to control chaos, to make sense of the whirl of our lives and how swiftly they change. As my wife pushed and pushed, my daughter was always there -- but unseen, hidden in the veil of her mother's body. It was not that my daughter came to life in that moment; it was that her life became wildly and vividly present. The shock of seeing a flailing, writhing, wailing infant, where nothing had been visible before, suddenly emerging and sliding into the waiting arms of the doctor -- well, the suddenness of the change was enough that I began to laugh hysterically.

The nurses worked swiftly and expertly to scrub her down. I did not want her first human contact to be rough and cold, so I put my finger within her palm and she clasped it tight. I was eager to touch her, and I wanted her to have something to hold onto. Still crying, drawing air into her lungs for the first time, hearing the raw-edged noises of life outside the womb, my daughter grabbed hold of me and would not let go. 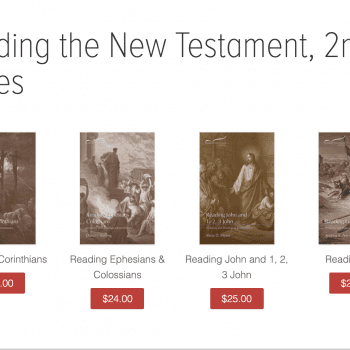 Review: Egregores
Mortellus
Get Patheos Newsletters
Get the latest from Patheos by signing up for our newsletters. Try our 3 most popular, or select from our huge collection of unique and thought-provoking newsletters.
From time to time you will also receive Special Offers from our partners that help us make this content free for you. You can opt out of these offers at any time.
see our full list of newsletters
Editor's picks See all columnists