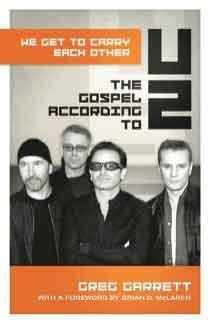 The title of Greg Garrett's new book about the spiritual side of Bono and U2 proclaims his central argument from the front cover. The book is called We Get to Carry Each Other: The Gospel According to U2.

Do you know those famous words?

Rolling Stone ranks "One" (the song in which this line appears) as No. 36 among the 500 Greatest Songs of All Time. It was released way back in the early 1990s, when the band was at a crossroads and nearly broke up. Depending on your age, you might recall the more recent Mary J. Blige version of the song, which also was a hit.

The words that end the song -- which prompt men and women around the world to "sing along" -- are:

And, in singing along, we're essentially joining in a global hymn, Greg argues. He writes, "The meaning of life, U2 ultimately reminds us, is not in how much gold you pile up, how many mansions you build, how many people you can order around, or even how loudly and devoutly you pray and proclaim your salvation. It is in what we get to do for each other.  "This is U2's faithful message to the world."  Did you catch that key phrase, "get to," in the lyrics and in Greg's book? That phrase means that it's one of life's great privileges that we get to help each other. Wow! That's a sermon that'll snap your head around, if you stop to listen to the lyrics!

Our spiritual mission doesn't lie in graciously deciding that we'll donate a little bit of money or expend a little effort on behalf of the needy -- when it's convenient for us. No. The orientation here is waking up in the morning and feeling thankful that we get to help out wherever we can.

HIGHLIGHTS OF OUR CONVERSATION WITH GREG GARRETT ON U2:

DAVID: We've told readers about your work before, Greg -- especially your earlier book on the spiritual lessons of comic book super heroes. You're always drawing creative connections between spirituality and popular culture. Tell us what you do for a living - beyond writing books.

GREG: I am professor of English at Baylor University and I'm writer in residence at the Episcopal Seminary of the Southwest in Austin and I'm a licensed lay preacher in the Episcopal Church. Mostly, I'm known as a writer and a teacher.

DAVID: We should explain to readers that, in addition to attending U2 concerts and following the band's work over the years -- you once had an opportunity to sit down with these guys and interview them.

GREG: I did. It was back in the days when I was a rock journalist. I interviewed them after they had recorded their second album.

DAVID: These guys are not card-carrying members of any particular religious group, are they? They're not regularly practicing Catholics, for example.

GREG: No, they absolutely are not. The interesting thing for many of your readers is that they have been people of faith -- but outside of almost any organized religious tradition for more than 30 years.  They grew up in Ireland and saw the people of Ireland blowing each other up over divisions of faith. They've felt they could live out their lives of faith more authentically outside of any organized tradition. Three of the four members would think of themselves as Christian but they have not been part of a formal Christian organization for more than 30 years. They seem to be very much in tune with various faith and wisdom traditions, though. They have worked with the Dalai Lama and with Jewish leaders and many others -- so it's a very ecumenical understanding they have about how we are called to be the face of change for the world.

DAVID: In a way, they're a voice for the "Nones" -- the growing ranks of Americans who answer with the word, "None," when pollsters ask them for their "religious affiliation."

GREG: Yes, Brian McLaren talks about them in this way. In a very real sense, they model new ways of being a faith community. The have a very clear sense of mission -- we are called together to help people. And, as they work out this mission, they seem to be modeling a new way to be people of faith.

DAVID: Why are they so enduring in their popularity?

GREG: Not only are they a band with incredible longevity, so they have lots of sales and awards and fans who follow them, but they're also a band that continually reinvents itself and keeps itself relevant. The new album, No Line on the Horizon, has new sounds and ideas.  I don't want to criticize other bands by name, but people know which bands only go back to work when they need more money. U2 was freed from that necessity very early in their career because of some smart business decisions they made. They're free from having to worry about making more money. So, in an album like No Line on the Horizon, there are elements of their past albums -- but you also hear some new Eastern stuff that comes from recording in Morocco. It's recognizable as U2, but they're still exploring new music. They're not resting on their laurels.