What Would Muhammad Do: Does the Internet Contain the Answers? 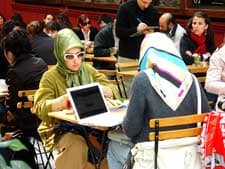 As the modern world increasingly succumbs to the age of New Media growing beyond the borders of the Internet, and into an era of hypermediacy -- digital verbs have become more commonplace than their unplugged counterparts. The growing technocrati can tweet, blog, wiki and email their commentary, memoirs, observations and mundane beliefs instantly from portable devices or large mainframes to a community of millions stretched around the globe.

Marshall McLuhan, media philosopher and academic of the 20th century, believed that while the medium was the message, it also served as an indicator of society's most pressing priorities. "As the unity of the modern world becomes increasingly a technological rather than a social affair," McLuhan said, "the techniques of the arts provide the most valuable means of insight into the real direction of our own collective purposes." Much of these collective purposes on the Internet have been in search of the divine. Providence or not, Islam on the web has certainly made its mark.

Islam-related Internet queries with real-world questions from seekers include such keywords as prayer, smoking, polygamy, headscarf and terrorism. These queries are directly related to one of the Internet's more popular phenomena for Muslims, "fatwa shopping."

Within Islamic jurisprudence, a fatwa is the response to a question or issue regarding specific principles of dogma as ascertained by a person or group with qualified religious knowledge. The answers can settle matters great or small, and are asked by the faithful worldwide.

Many young Muslims have found that fatwa shopping on the web has offered both solace and confusion. Seeking out queries on everything from sex and dating, to modern gender roles, Muslim Millennials use the Internet to ask questions that they might not feel comfortable asking at home or at their local mosque. Additionally, new converts and those who do not have access to an active Muslim community find themselves turning online for answers. An introductory search yields thousands of hits on the word, "fatwa" alone.

Distilling actual theology from cultural rhetoric is what Imam Muhammad Musri, President of the Islamic Society of Central Florida believes is the secret to understanding religion and technology in the digital age.

"We have to work within our communities to understand the awe-inspiring potential of the Internet. To respond to queries about God and religion and help those seeking answers find the best sources for their questions."

Leading a growing community of nine mosques and over 45,000 Muslims in Central Florida, Musri often lectures about utilizing new and old media for interfaith and intrafaith relations in the 21st century.

"To offer the most constructive dialogue about faith in America and worldwide, we must be willing to go where people have the greatest need, and if that need is at 3 a.m. in an online chatroom, than it is our responsibility as a community to understand how we make that environment as open and constructive as any mosque classroom."

Heralding the exchange for the religiously conservative Muslim seekers are websites like Islamicity.com and Sunnipath.com. Grown out of a need for religious answers for Sunni Muslims living in the West, both sites offer a variety of categories in broad and specific topics. Sunnipath goes a step further in billing itself as an "Islamic academy" removing the need for hollow answers to singular questions and instead offering what they call, "relevant and reliable Islamic answers," serving as "the authoritative source for practical Islamic knowledge, guidance and inspiration for your life." Sunnipath is rare in its claim to offer a modern exchange to timeless Islamic knowledge.

For every constructive website on Islam there are dozens of others that offer anemically myopic commentary on jurisprudence and daily faith-based living.

However, analyzing accessibility and efficacy masks a more pressing examination of issues in the Muslim world today. "Will the real Islam please stand up?" asks Neil MacFarquhar, author of The Media Relations Department of Hizbollah Wishes You a Happy Birthday: Unexpected Encounters in the Changing Middle East.